Pantera legend Phil Anselmo remains an expert on at least two disciplines: extreme music and horror films. Accordingly, the two intersect this weekend at his Housecore Horror Film Festival. In honor of this monster convergence of movies and heavy metal, the singer reunites Superjoint (sans Ritual) on Sunday at Emo’s. 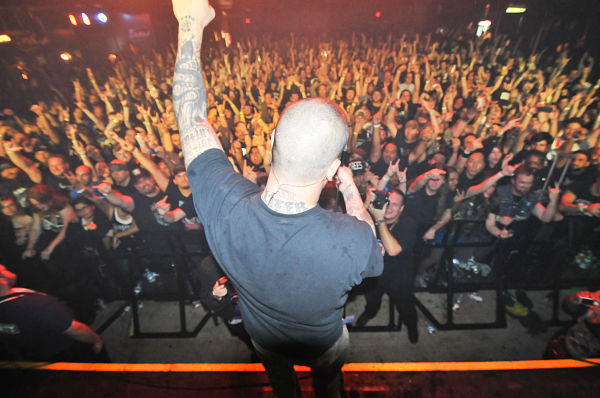 Austin Chronicle: This festival’s tailored for people who love metal and horror movies. Where do those art forms crossover?

Phil Anselmo: It harkens me back to my gut feelings on genres like death metal. I don’t even think there’d be death metal if it weren’t for the classic possession movies like The Exorcist or Evil Dead. I think the guttural sounds of the demons inspired death metal vocals big time. Horror flicks also have religious overtones – Rosemary’s Baby – and bands have always exploited that symbolism in their content. Just look at black metal.

AC: What’s a band the average fan might not know, but that you’re pumped to see at HHFF?

PA: I’m going with Portal from Australia. They’re the greatest death metal band right now and that’s saying a lot. They’re unique, insane, and extremely technical, but they have a looseness about them. They’ve almost invented their own type of groove.

AC: Danzig and Samhain are huge scores for the Festival. Were you a Misfits fan growing up?

AC: Glenn Danzig shares your love for horror movies. What’s your relationship with him like?

PA: We’ve always been friendly with each other. I grew up a huge Misfits fan. When Pantera was just dippin’ our toes into mainstream waters, Danzig already had a successful solo career. The first time we met, I was in Los Angeles and Pantera was opening for S.O.D. That was a hell of a show. Glenn was in the audience and on my way backstage we made eye contact. I thought, “This guy has no idea who I am,” but he walked up to me, shook my hand, and smiled.

He gave me props right off the bat because I was always wearing Misfits shirts. Being the aggressive type of frontman I am, Glenn has always been a huge influence. The respect there was super mutual and always has been and still is to this day.

AC: How does the music lineup come together for Housecore?

PA: A lot of times it’s me saying, “I want this band!” I also get bounce back from Corey or one of the other coordinators who know which bands are available and we got to try and grab them. A lot of bands book their whole year ahead of time, so all that’s a little fuckin’ tricky. But a lot of the time, it’s my choice. The other 30 percent of the time, it’s suggestions.

AC: Last year HHFF had Down and Phil Anselmo & the Illegals. Did you decide to do Superjoint this year to do something different?

PA: According to Corey Mitchell, there was a poll taken of what reunion band the audience wanted the most – excluding Pantera because we know the problems there – and Superjoint got voted in. It wasn’t something I’d even considered. We put our heads down, thought about it, and I always want to give the people what they want. So Jimmy Bower and I got together and started jamming. It felt really good so we said, “Let’s just go kick fuckin’ ass on a one-off show. No harm, no foul.”

PA: Nah, not right now, Jack. I’m booked. All of a sudden, there’s offers coming in, but I’m not taking any of that shit seriously.

AC: Who’s rounding out the lineup?

PA: We’ll leave that element a surprise because we do have some tricks up our sleeve.

AC: I wondered if Bobby from Down is involved because he’s an Austin favorite.

PA: No, but Bobby’s a fuckin’ fantastic help to the entire festival. He’s one of the greatest. We are talking about my Bobby from Down correct?

AC: What was your favorite moment from last year’s HHFF?

PA: Having Goblin there scoring Susperia was amazing. That was surreal. Dale Crover jamming with Eyehategod was unbelievable. Without the Melvins, the entire New Orleans thing as far as slowcore goes – I don’t know what the fuck else to call it, most media call it sludge, but we’re kind of against that around here – that slow and deliberate playing in a Black Sabbath type fashion, the Melvins were the biggest influence. Especially for Jimmy Bower to start a band like Eyehategod. To see Dale up there, in the wake of the death of Joey LaCaze, was incredible.

Last year was so laid back and cool. It had this adult family atmosphere. What a fuckin’ blast man. I can’t wait for this weekend.

PA: Fuck, I love Austin, man. Texas is my second home and I’m making sure people know that.