For its second ACL Fest sunset, the Minneapolis foursome picked up where they left off, opening with last Sunday’s closer, “Alex Chilton.”

The ‘Mats upped the attitude and hijinks, with Paul Westerberg swapping last week’s suit for Hee Haw overalls sans undershirt. Drummer Josh Freese made a local nod with his Daniel Johnston “Hi, How Are You” tee. Noticeably playful, the frontman plunged into one of two onstage hammocks for 1981 Sorry Ma tune “I’m in Trouble.”

“This isn’t gonna fucking work,” he doubted, but it did. In place of last week’s Jackson 5 cover was Billy Joe Shaver’s “Live Forever,” while “If Only You Were Lonely,” “Don’t Ask Why,” “Love You Till Friday,” and 2006 Open Season track “Love You in the Fall” also worked their way onto the fresh set list.

Week one, Westerberg surprised Tommy Stinson with a smooch during “Kiss Me on the Bus.” Yesterday, the bassist one-upped the singer by crashing his lie-down during “I Will Dare.” “How young are you? How old am I?” sang the latter while still strumming as the pair giggled like youngsters, their sneakered feet spilling from the hammock.

Following a fiery delivery of intended closer “Bastards of Young,” the band was informed they had time for one last song. They tacked on Let It Be fan favorite “Unsatisfied.” Afterward, marking the weekend’s most punk rock moment by far, Westerberg removed his guitar and coolly eyed it for a second before hastily smashing it to pieces and shuffling offstage. 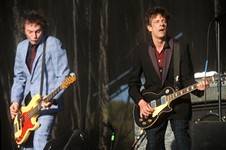