Sunday afternoon, Zilker Park became a swamp that smelled like stockyards. Large chunks of lawn transformed into muddy bogs getting steamier once the sun came out and cut through the chill. Which made it all a big, stanky sauna.

Graciously, church was in session inside the Zilker tent. A sermon preached by rock & roll consultant BP Fallon, “I Believe in Elvis Presley” (“I believe in rockabilly and rock & roll”) improvised its climax: “I believe in Imelda May.” One force of nature thus made way for another. 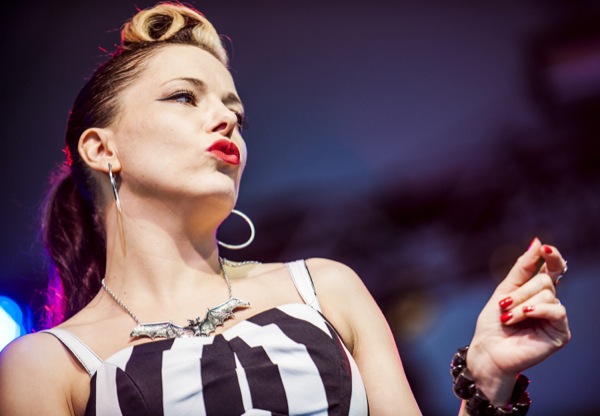 Meanwhile, May oozed sultry tones suggesting Wanda Jackson on a Billie Holiday bender. Mind you, neither Jackson nor Holiday ever wrote a lyric complaining about their man being on eBay too much. Nor would they have gleaned inspiration from Aleister Crowley via “Hellfire Club,” found on new LP Tribal and here a live set highlight.

May’s enormous voice filled the room, captivating a crowd with more Jayne Mansfield-proportioned young women than a Kustom Kar rally. Two tunes from the end, she and Al Gare sat atop his doghouse bass. He strummed a ukelele, she crooned Blondie’s “Dreaming.”

In that quiet moment, Imelda May owned ACL Fest.