Glitch Mob excites crowds with a kinetic, aggressive performance that pushes them into the upper stratosphere of bass-driven club music. All the L.A. trio’s sound centers on these vaunted live sets. Unfortunately, while the impressive light show gave ACL Festers something to marvel at, the remainder fell flat and sonically underwhelming. 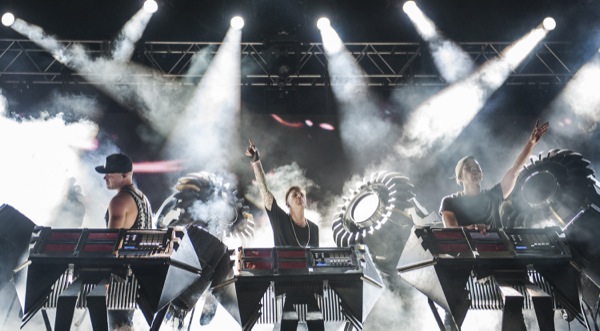 Building a rep on hip-hop remixes, the Mob broke out on 2010 debut Drink the Sea, a multi-genre concoction built for festivals. Taking the wrong cues from acts like Justice, Deadmaus, and Rustie, they then lept backward on this year’s Love Death Immortality, a middling collection of club selections.

With hype in full effect and the unenviable position of preceding Outkast on the adjacent Honda stage, a crackling performance was in order. Something to rev the audience into something memorable. What those in attendance received instead was analogous to a generator running low on fuel.

Though playing proficiently on programmable devices, the threesome’s stunted energy transfer – caused by lack of gradation in track selection (and perhaps quality) – fell short on substance and depth. Although three distinct tracks as previously recorded for wide release, “Fortune Days” sounded like “Drive it Like You Stole It,” which sounded like “I Need My Memory Back.”

Most of the crowd either danced off beat, or casually bobbed with friends, smartphones in hand waiting for Outkast. Late-set efforts notwithstanding, the trio’s grey-toned production rang in humdrum. And forgettable.