Scale: two nights by Paul McCartney at the Erwin Center in May versus Ringo Starr’s pair of performances at the Moody Theater this week. Call it a difference of 20,000 fans. And yet, when the Beatles drummer touched off “Yellow Submarine” halfway through a two-hour set Wednesday night at the Moody Theater, it was equally – and literally – breathtaking. 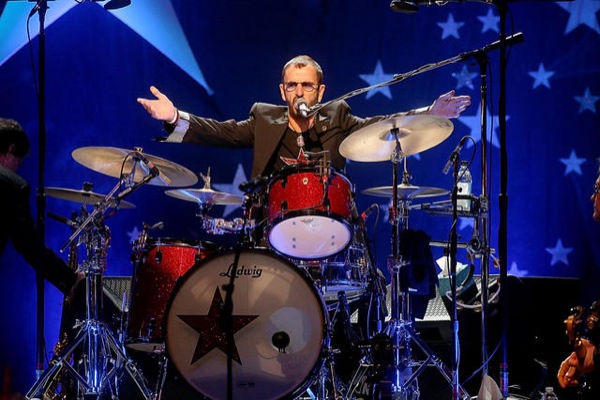 Your breath caught – powerless to whatever personal nostalgia came dislodged by 1966’s psychedelic U-boat. McCartney’s “Blackbird” – aired this spring on Red River – evoked hush by design, but was no less as piercing as a funner Beatles ditty, “All Together Now,” also boogied locally by Sir Paul. “Yellow Submarine” transcended novelty somewhere along its lifeline. Now, it simply stops you in your tracks.

So did Richard Paige of Eighties hitmakers Mr. Mister. Like current bandmate Steve Lukather of Toto, Ringo’s All Starr bassist this tour broke into the Top 40 after observing it firsthand as a studio musician in Los Angeles. Lukather’s axe work swathes across any classic rock record collection. Nevertheless, whenever Paige’s turn came to present a musical trademark (“Kyrie,” “Broken Wings”), the entire Moody sat right down.

That’s because the well-heeled audience was tired of standing, but Lukather fared better with Toto standards “Rosanna,” “Africa,“ and “Hold the Line” by stretching them into near prog jams. He’s no Carlos Santana, but for that the live music capital provided Starr with Gregg Rolie, who bested his former bandleader – playing the same venue last month – on “Evil Ways.” Rolie’s stony vocal on the original remains a tingler live when paired with his organ broil. Santana had it over Rolie on “Black Magic Woman,” Lukather not aggressive enough,” but only one band had Ringo Starr on drums and the rumble he brought to Tito Puente’s “Oye Como Va” was protean. 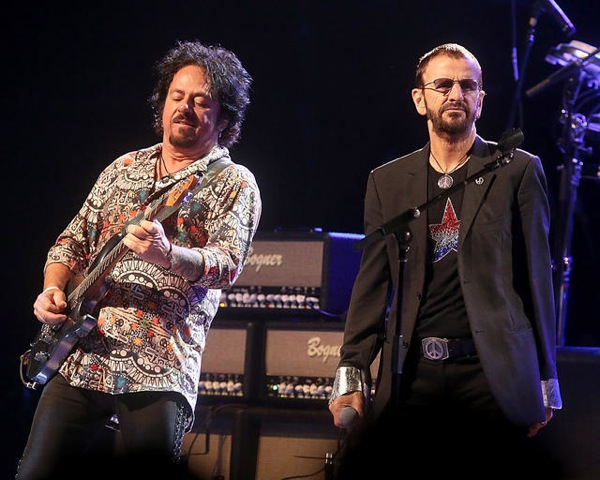 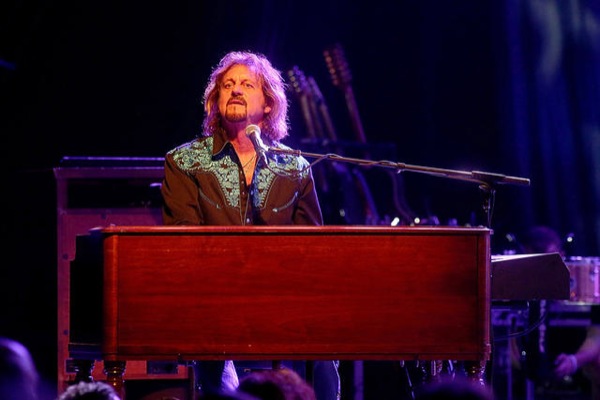 All Starr drummer Gregg Bissonette did not perform any of his David Lee Roth accompaniments (“Yankee Rose”).

In fact, Mr. Mister demonstrated the generosity of the headliner – the All Starrs all paid genuine tribute to “the boss,” beginning with second six-stringer Todd Rundgren – by getting to include “a new song” he wrote in Nashville, which went over like a lead balloon.

“Look, there’s Robert Plant in the audience,” joked Starr at one point, unrelated.

Indeed, the show’s mega Starr split the set-list more or less down the middle between his sidemen’s signature tunes and his own. “Yellow Submarine” wasn’t the only dopamine drop inducing flashbacks, either. Kinetic fissures of early Beatlemania electrified the full house when Starr broke out “Boys” and later “I Wanna Be Your Man.” McCartney had “Eleanor Rigby,” sure. Starr lit a proverbial fire with/under rockabilly opener “Matchbox.”

In that sense, Starr does himself a disservice. Why not an all-Starr set as opposed to All Starr sets? Other Starr vehicles by the Beatles went missing, notably his cherubic contribution to the group’s masterpiece Abbey Road, “Octopus’s Garden,” not to mention tracks from Rubber Soul and ‘The White Album.’ Moreover, in this day and age of album recreations, Starr could’ve floored his hardcore fanbase by putting 1973 Apple Records prize Ringo back on the map.

True, “You’re Sixteen” only peaked at No. 8 on Billboard, while Harrison/Starkey (aka Starr) lead single “Photograph” – wobbled dangerously for a moment last night – shot straight to No. 1. The former, however, preserves a Fifties teen sheen slightly truer than the latter if only because “Photograph” today feels like a Kodak moment. There’s nothing if not a Catskills/Shecky Greene component to Starr’s shows, which “You’re Sixteen” would embody effortlessly.

“I did this song with the other band I used to be in,” went Starr’s “Boys” preface. “That’s right! Rory Storm & the Hurricanes.”

Clearly at issue, then, was authorship.

“I wrote quite a few songs that weren’t acceptable to those other three,” noted Starr cheerfully before launching his self-penned debut for the Beatles, “Don’t Pass Me by.”

If that’s the case, Ringo shake-its “Oh My My” and “Devil Woman” bear the Starkey stamp. Twenty-five selections here might have yielded half Beatles, half Starr without much strain, especially with Ringo 2012 to promote. Flapping its “Wings” in the third slot, Starr feigned shock when only mild cheers greeted mention of his most recent release.

“I’d like to thank the six of you who bought it,” he winked drolly.

Any All Starr trek over the last two decades lived and died by its band, which has included the likes of Jack Bruce (Cream), John Entwistle (the Who), and Levon Helm (the Band). Those canons carry more obvious weight than Toto and Mr. Mister, but Rundgren infusions “I Saw the Light” and “Bang on Your Drum” came off as irrefutable highlights of the concert.

Even so, through the Branson, Missouri, moments both elating and deflating, the man of the hour waving peace signs like Richard Nixon never existed surrendered exactly zero Starr power over the course of the evening. 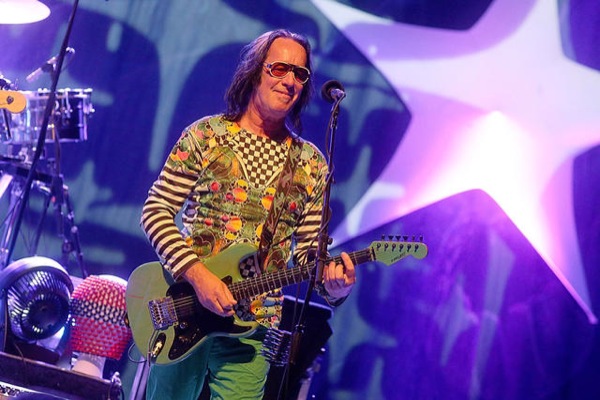 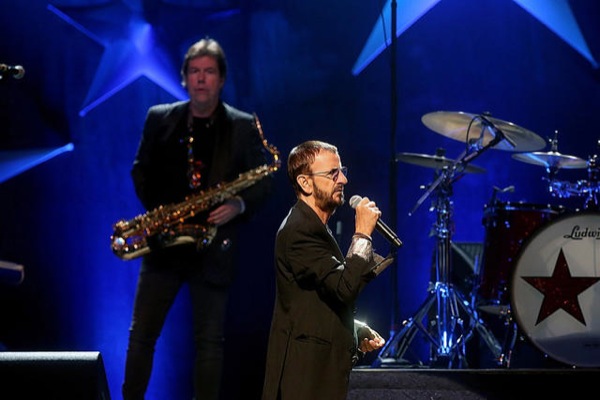 The headliner out front of All Starrs MVP – multi-instrumentalist and high-note ace Warren Ham, alum of Fort Worth’s Bloodrock (Photo by Gary Miller) 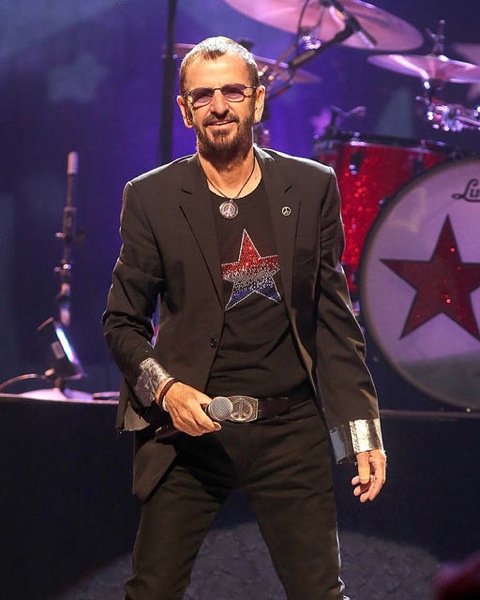 What could he say about “With a Little Help from My Friends” he acknowledged before ending the night with it? More so than “Yellow Submarine,” the Sgt. Peppers’ invocation provided an instant pleasure center dismantling. Suddenly, ladies and gentleman, you were floating in the space of the last half-century, lost to some collective response to the Beatles. Starr ran back out for a chorus or two of John Lennon‘s “Give Peace a Chance,” then sprinted off and was gone.

Tickets remain for Ringo Starr & His All Starrs’ Sunday show. Go – you won’t get this opportunity again. Lennon, marked by a birthday today, knew it long before he gave “I’m the Greatest” to Ringo: Richard Starkey brought the Beatles – and ultimately, mankind – everlasting congeniality. 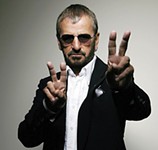 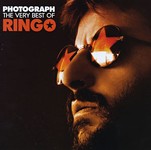