“I know it’s not on the list,” Paul Westerberg informed a protesting Tommy Stinson after playing a familiar riff snippet midway through the Replacements’ first Austin gig since their 1991 breakup. “I wanna play it anyway.” 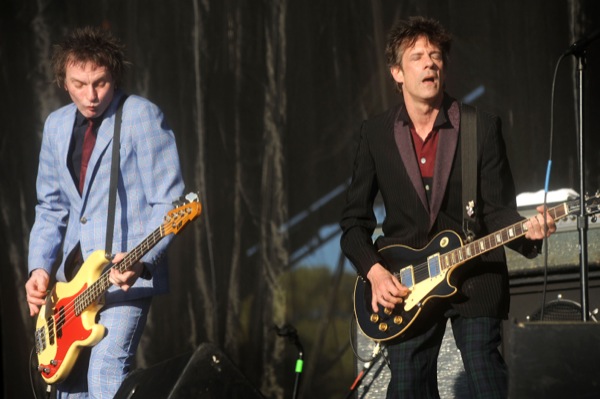 Zilker Park only got the first verse and chorus. Had this been 1985 – the last time I saw the Replacements live – that’s all we would have gotten as well. Albeit delivered piss-ass drunk, and accompanied by 152 other first verses and choruses of some other really rotten songs. All played really badly.

Then the band would’ve walked off, with nary a note of Westerberg’s brilliant, aching originals aired.

Happily, the 2014 lineup with whom Westerberg and Stinson graced ACL Fest – force-of-nature drummer Josh Freese and Neighborhoods guitarist Dave Minehan holding down Chris Mars’ and Bob Stinson/Slim Dunlap’s places, respectively – only hints at such past disregard, always with broad humor. They were tight, focused, and in full punk mode. Witness rave-ups “Favorite Thing,” “I’m In Trouble,” “Tommy Gets His Tonsils Out,” and “White and Lazy.”

Passes were made through more sensitive turf (“I’ll Be You”), ramshackle country (“Waitress in the Sky”), and a blown-chorus jab at “I Will Dare.” They threatened “Hootenanny,” then devastated with the one-two encore walk-off “Bastards of Young” and “Alex Chilton.” This year’s ‘Mats act like they have something to prove.

ACL Live Shot: The Replacements
‘Mats up the attitude and hijinks in a second-set punk encore