Live, the onetime Rilo Kiley frontwoman is no rerun The former Rilo Kiley frontwoman was all smiles as she led her band through songs from her new Voyager (“Slippery Slopes,” “She’s Not Me,” “Just One of the Guys”), as well as tunes from her old band, including “The Moneymaker” and “With Arms Outstretched.”

“Get your fists in the air for this one,” she rallied, introducing “Rise Up with Fists!!” from a 2006 collaboration with the Watson Twins, Rabbit Fur Coat.

With impeccably sturdy vocals, the Wizard actress moved between acoustic and electric guitars, both also speckled with the same pastel backsplash as her suit. She frequently walked to the edge of the stage, mic in hand, and locked eyes with awed fans. Tucked away from the headliner stages and even bigger crowds, the Austin Ventures stage was the ideal home for Lewis’ set, allowing for a degree of intimacy commensurate with the songwriter’s lyrical candidness.

It never tires seeing the now 38-year-old on a rerun of Roseanne or The Golden Girls. Watching her perform, however, makes one grateful that she’s migrated from acting to music. The songstress seemed equally pleased as her set wound down.

“You guys have been so fucking great. What a day!” 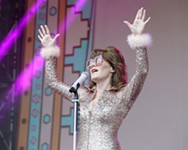