Equipped with his branded Tron and Space Invaders spaceship, Skrillex shot down the Honda stage and crowd in a never-ending bass drop spree. Older couples gyrated in the same fashion, frequency, and beat as the younger bros. Losing yourself to Skrillex clearly does not have an age requirement. 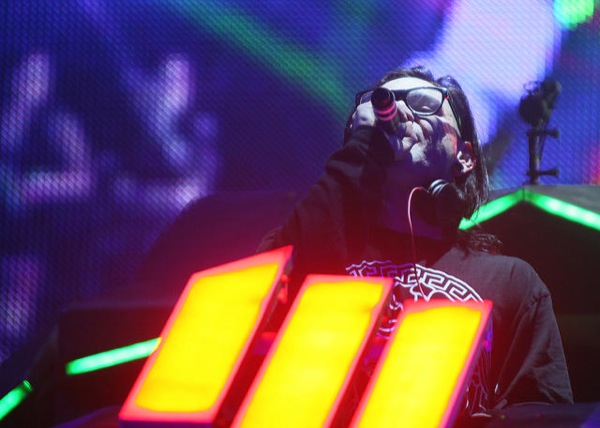 Beginning with an audience one-quarter the size of Eminem’s across the park, Skrillex steadily drew ravers like moths to the proverbial flame. (Photo by Shelley Hiam)

With the argument for (or against) Skrillex finding its way closer to moratorium, the EDM megastar bears less of the weight of electronic music. Haters of the brand are actually angry at its fans, and not the artist. Sonny Moore has never called himself anything more or less than an electronic artist.

The principal knock on the L.A. native lies in his origins within EDM, and the unusually timely events and paths taken which have led to his near-global domination. What cannot be questioned is his miraculous penchant for moving the crowd and the synergistic fervor he creates. It’s not about him, or you. Your love will be reciprocated throughout the set.

Specific genre somewhat negligible, the continuous bounce remains all. Everything within a certain BPM index was introduced: rap (Schoolboy Q’s “Collards Greens”), New Orleans bounce (Diplo’s “Express Yourself"), various trendy, party-inducing trap singles, and all of the “–steps” he could climb.

The wobble’s still a virtual trademark. His genre-defining drops rock senses of reality like concussive blows, quickly shaping the completely partisan crowd. One of Moore’s best samples explains exactly what he did to the spectators, using Pusha T’s verse: “I came, I saw, I conquered, I balled.”