Diplo plays a few Major Lazer songs and some other stuff, too

There was a time not long ago when the electro-reggae of Major Lazer came with massive live production value. Dozens of backup dancers, stunts, and the physical presence of founding member Switch. I have a vibrant memory of seeing a man climb a ladder, leap off, and land directly on a woman’s crotch as part of the Major Lazer stage show.

Things are different now. Switch exited the project under dubious circumstances, leaving Diplo as the sole DJ. The back-up dancer budget has been scaled back, ostensibly to pay for Wayne Coyne’s plastic hamster ball, and bleach-blond mohawked hypeman Skerrit Bwoy has long traded in his raunchy raps for a life in ministry. 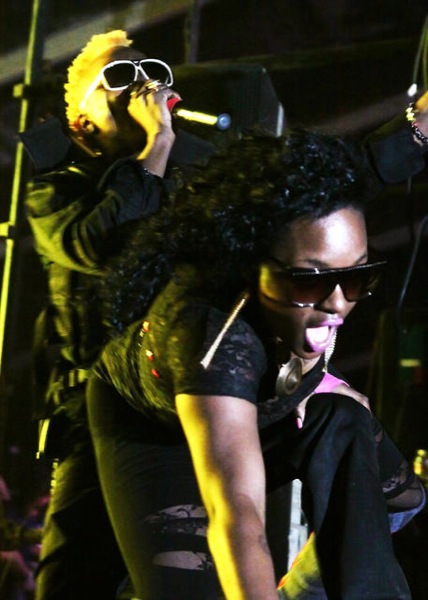 All of that withstanding, Major Lazer is at peak popularity. Its ACL crowd stretched to the fringes of Eminem’s empire. When you can get hundreds of semi-self-respecting festivalgoers to chuck their shirts in the air, you’re dealing with some real power.

Diplo treats these shows like any one of his DJ dates, playing pretty much whatever he wants, regardless of whether he owns production credits or not. The 35-year-old remains the life of the party, and it doesn’t matter that the bill would more accurately read, “Diplo plays a few Major Lazer songs and some other stuff, too.” The favorites were here – “Bubble Butt,” “Pon De Floor,” “Get Free” – all executed with that preprogrammed precision that modern dance music requires when the lights and video don’t take well to improv.

Again, this doesn’t matter. If the redundancy of the set list and autopilot performer irks you, welcome to 2014. The kids don’t care, they’re having fun. Ryan Adams and Asleep at the Wheel welcomed ACL Fest back in 2002. Twelve years later, Iggy Azalea dropped the hammer, Major Lazer blew the house down, and a mass exodus of youth stumbled across the park to see Skrillex.

Sunday, the biggest crowds will inevitably be Zedd and Calvin Harris, two performances currently sitting quietly by a laptop somewhere in a tour bus.

Outkast, Eminem, Major Lazer, Skrillex, Calvin Harris, Zedd. The other headliners? Beck and Pearl Jam, two artists who’ve scarcely had a relevant moment since 1999. Rock music is dead – for now – and ACL Fest has left that guitar-toting fogeyism behind.

I, for one, embrace our new bass-dropping overlords.

ACL Review: Major Lazer
Circus maximus for the under-30 set