They’re a greatest hits act – pure and simple – with nothing new since “I’m on It” in 2006. Straight heaters (“ATLiens,” “Ms. Jackson”), small chasers (André’s Love Below solo mid-set), a certified knockout (“Hey Ya”), then some Southernplayalisticadillacmuzik. Sing the state song (“Deep in the heart ...”) a cappella and close on “The Whole World.” 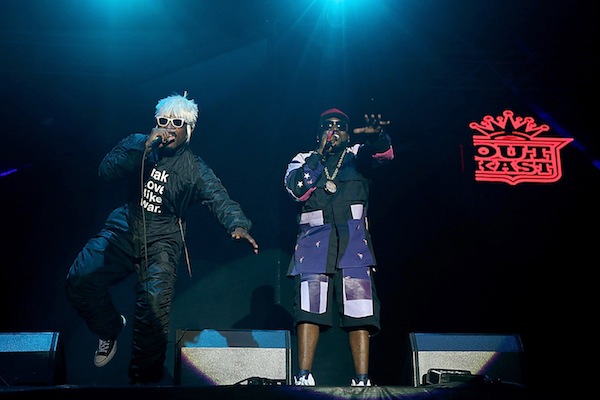 That Outkast’s first touchdown in Austin since 2001’s blowout of the Austin Music Hall didn’t carry the same juice as that first Playa’s Ball didn’t matter on Friday evening. Them dudes are Kings of Atlanta rap.

Rulers of the Dirty South.

Purveyors of the stankiest funk.

That the duo stops over in the ATX on its festival circuit conquest speaks to this town’s place in the grander scheme of music. Intimate reunions are meant be shared with big urban audiences. Especially if Stankonia and Aquemini are involved.

Anybody paying a lick of attention to Outkast’s 40-festival run knew how Big Boi and André would commence services. There was “B.O.B. (Bombs Over Baghdad),” then “Gasoline Dreams,” “ATLiens,” and “Skew It on the Bar-B.” They played “Rosa Parks” and “Da Art of Storytellin’ (Parts 1 & 2),” and afterward appeased everybody with “SpottieOttieDopalicious” before a quick break and “Ms. Jackson.”

The moment André split off to the side of the stage to break down, “Ten times out of nine/ Now if I’m blind fine,” my mind shot back to past ACL Fest headliners: the Eagles, Stevie Wonder, Lionel Ritchie. André and Big Boi may record new music eventually, but their best work’s now bygone. They still bring it – the big horns, dope clothes, backup singers, and sweet style – but they’re relics of the festival circuit.

Both rappers went solo for a second before returning for Southernplayalisticadillacmuzik and closing with the grand one-two-three of “Roses,” “Int’l Players Anthem,” and “The Whole World” as a sendoff. They fit everything in for sure. All the hits – just like clockwork.