Southern rockers pivot on a “Good One Coming On” 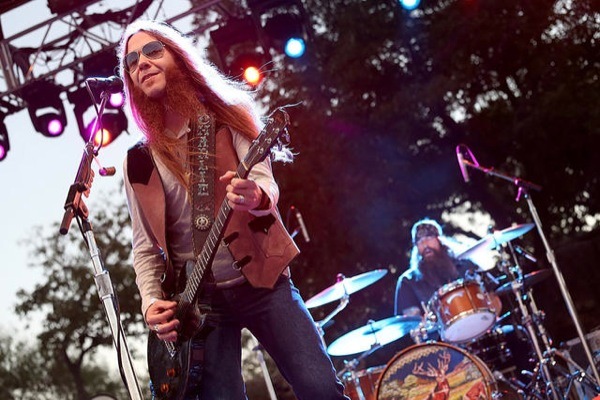 As the final bars of Childish Gambino’s shirtless serenade sounded from across the lawn, a chorus of Miller Lite cans greeted the Georgia quintet. They launched “Six Ways to Sunday,” a honky-tonk anthem from this summer’s double live shot, Leave a Scar: Live in North Carolina. What followed was beer-sloshing arena rock with a Nashville gleam.

Since rowdy 2004 debut, Bad Luck Ain’t No Crime, Blackberry Smoke has landed tour slots with country stars Eric Church, Zac Brown, and the Southern rock & roll grail, Lynyrd Skynyrd. All that long hair and Starr’s mutton chops make them look like their 1977 forefathers. After a decade on the road together, the fivepiece ran with the efficiency of a freight train.

Starr teased the Allman Brothers with a brief snippet of “Midnight Rider,” drawing howls of approval, then plucked “Ain’t Got the Blues” as Brandon Still lit it up on keys. The opening verse of “Good One Coming On” (“Two six packs of Shiner/ 99-cent butane lighter”) drew the crowd to its feet, belting in unison.

By the last song, the edges of the crowd began to disperse and divide between the night’s two headliners: OutKast and Beck. A clump of fans stuck it out for closer “Ain’t Much Left of Me,” a man’s lament over a divorce. Starr’s bruising riffs and Still’s frantic keys did the rest.