As the sun set on ACL Fest day one, weekend one, headliners took their respective stages on Zilker Park’s opposite ends. For a tiny white guy in a wide-brimmed hat, Beck rivaled the explosive funk of concurrent festival stars Outkast. 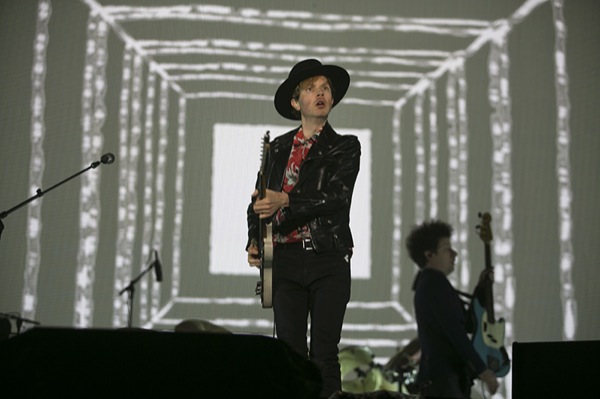 Where It’s At: Beck co-headlining day one, weekend one of ACL Fest 2014 (Photo by Jana Birchum)

Ablaze from the get-go, Beck and band opened with Odelay single “Devil’s Haircut” trailed by 1994 slacker anthem, “Loser,” a dancing crowd singing along to every word. Now 44, the Los Angeles native whirled around the stage continually like a geek-chic incarnation of Soul Train.

“We’re gonna burn all the fuel ‘til there’s nothing left to burn,” the singer rallied.

Balancing classics (“Girl,” “E-Pro”) with newbies like “Blue Moon” from this year’s Morning Phase, the 75-minute set spanned the artist’s 20-plus year career, bridging fans of all eras. Matthew McConaughey perched himself by the soundboard for the set’s entirety.

Bouncing between uptempo pop, soulful grooves, and acoustic gentility like “Lost Cause,” the guitarist flexed his wide-ranging repertoire.

“I’m gonna play some old-fashioned, bombastic riffs,” he teased before cranking out an impressive solo.

The Scientologist jested at Austin’s undeniably palpable evolution, setting the mood for “Debra,” a “slow jam,” he explained, “to ease the pain felt when we come to town and see all these condominiums being built.”

After heartily fun 1996 hit “Where It’s At” closed the performance, Hansen earnestly pledged fondness for our town, naming Austin one of his favorite cities in the world: “The music’s always been here.” 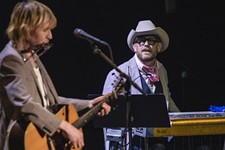