Even in the colorful world of Tune-Yards’ chanteuse Merrill Garbus, the daily grind can go awry. Unlike the rest of us, her summer’s been a whirlwind of international tours solidifying her as one of the most dynamic acts on the festival circuit. While in London promoting her third LP, May’s Nikki Nack, she still has to sweep her hotel rooms for bed bugs. 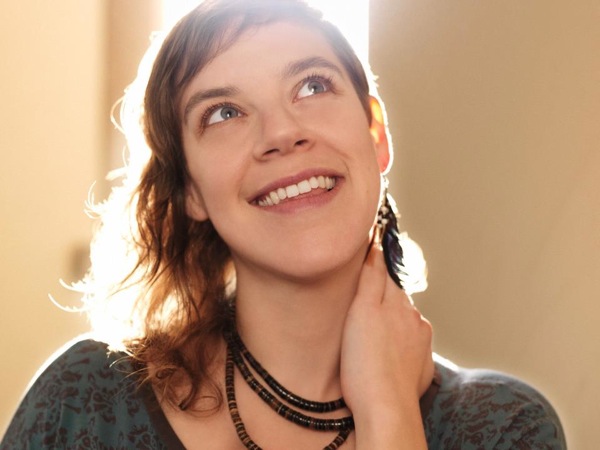 Merrill Garbus: It’s fine. I’m sorry the phone didn’t ring on my end either. I’m glad we finally have each other.

AC: Oh gosh, it’s not been my day with technology.

MG: What else happened?

AC: My phone alarm randomly turned off, my iPad wouldn’t turn on this morning. Mercury must be in retrograde.

MG: Me too. Honestly, it has not been a good few days over here for anything. So I’m trying to Zen out and take it one step at a time.

AC: What’s been going on?

MG: Oh, it’s just been one of those tours where all is well, but then we had a run in with some bed bugs at a hotel. It’s the first time that’s happened to me, and just other random things where it has to be the hard way. So it was no surprise to me that connecting with you wasn’t as easy as it is supposed to be [laughs].

AC: So aside from the last couple of days, how has the tour gone overall?

MG: Awesome. Even with the last couple of days, the shows have been hands-down wonderful. Especially in England it’s been really great this time. People have latched onto the album here, so it’s nice when you feel like you’re floating on people’s energy. As a performer, it’s kind of rare to have people giving back to you so much that it feels kind of effortless to do a show. That’s new for me and it’s been great.

AC: You feel that more from UK crowds?

MG: Yeah, it’s one of the strongest places for us now. I think that a lot of people struggle here in the UK. We’ve come through quite a bit. This is our second time this summer, going to cities like Leeds and Bristol with really exciting crowds, whether it’s some kind of really huge festival like Glastonbury, or a kind of intimate club. There’s just been these really sweet crowds, so it feels like a really strong place for us, as does the States.

There are certain places we haven’t toured as much. The album isn’t hitting people as hard in places where English isn’t the primary language, so those can be slightly more challenging for us to play. But it’s been really wonderful overall, and I’m so excited to come to Austin. I really love it there.

MG: That was really fun. That was a good example of a Texan crowd. Even though it was in this stuffy studio, I remember it being a really spirited show. It didn’t feel like a cold television performance.

AC: I remember being struck by how comfortable you were. Performers get visibly stiffer once a camera’s in their face, but that wasn’t the case with you.

MG: It’s really hard to overcome that, I think. When we did the Jimmy Fallon show, the first few notes were pretty trembly, because all of a sudden you’re like, “Oh my God.” I’m really training for that comfort of being onstage. My job is to get over this scared feeling in order to do my job up here. I feel like I’ve had a lot of practice in that over my life.

AC: How do you feel like your performance has changed with more experience?

MG: Good question. I feel like we have a set now. Visually, we have more going on. We have a couple of singers who are also theater crazies and have a different sense of performance, I guess. I think in the past I’ve relied on an audience’s approval more. Of course I want audiences approval as much as the next guy, but I think that finally I’m like, “Oh, I’m doing this music because this is the music I believe in and everyone can kind of go fuck themselves.” I mean that in the nicest way, because everyone seems so right there with me.

In order for me to go deep into a performance and focus in on that performance I can’t be distracted by if that person is having a good time, or this person is having a good time. I think in the past I would do that a little more. Otherwise, there’s a lot that’s similar. There are themes that we keep coming back to, and we have this desire to let people lose themselves in music for the hour we have their attention. I think that’s been true the whole way through Tune-Yards.

AC: What kind of themes are you coming back to in your live performance?

MG: I have this interesting relationship with jamming out onstage. You know, the parts of songs where there’s this psychedelic dance breakdown [laughs]. I think that’s part of the joy of live performance. You can change it up from the album version, because the album demands captivation in a totally different environment.

At a show, you have them slightly buzzed on alcohol, or if not, in a special state. It’s just a totally different beast. I don’t like to think about it as jamming out, but I think there are parts where you can expand the song. That happens a lot with “Bizness,” where on the album it’s a 20-second breakdown that turns into a more melodic thing live. Recording an album, there are all these different skills that are involved, and when you take it live I guess it’s a trance.

That’s the way I would talk about it. I want to invite people and invite myself to go to a different place rather than just the mundane earth that we normally live in. I think that’s a thing that people describe as hope or joy or freedom. There’s something that happens when a group of us get together and share an experience of performance. That’s what’s been so cool about the audiences on this tour. It really does feel like a give and take.