The Return of 8 ½ Souvenirs

Calling all dancers, have you heard the word? Happy days are here again. Olivier Giraud, Glover Gill, and Kathy Kiser Benayoun have returned as 8 ½ Souvenirs. The band can be heard every Tuesday at C-Boy’s Heart & Soul. After a long break, the Austin institution reignites its soundtrack for swingers, cavorting once again on Congress Avenue to the Lindy Hop.

Enjoying occasional reunions, the Nineties cabaret phenomenon knocked off around 2000, but now kicks off its second week of residency on the Austin strip where it flourished two decades ago. Initial frontwoman Kiser – now Benayoun – is typically modest when credited with presaging the pre-millennial lounge movement.

“Wow, I never really looked at it as us starting the movement,” she says. “It was all sort of percolating up at the same time. Swing dancing was happening, but it was more big band or country swing. What we were playing no one had really heard before.

“We put the international spin on it because it was natural for us. Olivier is French and brought all his passion for Django [Reinhardt], [Paolo] Conte, and [Serge] Gainsbourg to the table. I love that the swing dancers come out for the shows.

“They’re the best gauge for determining if new songs should stay on the set list.”

8 ½ Souvenirs began in 1994. There have been three different lead singers, including Julianna Sheffield and Chrysta Bell. Their cult hit, local indie smash Happy Feet, boasts three different versions – one for each volcalist. 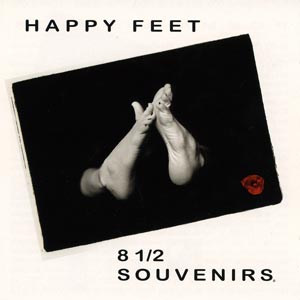 Austin Chronicle: Remind us how it all got started originally?

Kathy Benayoun: We began playing at the Continental Club, of course! Glover Gill and I had started a little lounge quartet called Swank. Olivier, Todd [Wulfmeyer, bass], and Adam [Berlin, drums] were 8 ½ Souvenirs, and were also playing at the time and would ask Glover to sit in on occasion. Then I got pulled in for a few songs. Before we knew it, Swank was on the back burner and the “new” 8 ½ Souvenirs lineup came to life. This was the summer of 1994.

AC: What inspired this comeback?

KB: A few years ago, I realized we were coming up on that band’s 20th anniversary. I’m Facebook friends with Todd and Olivier and I just sort of put it out there, “Wouldn’t it be cool if....” We decided that if we were ever going to do it, it could only be with the original group. Everyone except Olivier had either or quit or been replaced at one time. It wasn’t until last year that I even figured out how to contact Glover. Once he agreed, we reached out to Adam and voilá!

AC: Material remains a mix of covers and originals?

KB: Yes, both. Olivier and Glover have written several originals that we do. Most of the covers are by Paolo Conte, Serge Gainsbourg, Nino Rota, and Django Reinhart. We have a few standards that we also like to do, but if we do covers, we prefer the Italian and French ones, stuff that most Americans aren’t really familiar with.

AC: Did motherhood inspire the musical break for you?

KB: I got married right after we recorded Happy Feet in 1995. My husband, Claude [co-owner of Vespaio] took a job in Islamorada, Florida, to open a restaurant for a friend of ours there. So we moved before the album was released. That’s also where I got pregnant. It was really strange when we moved back to Austin in 1997 and I would hear that album getting played on the radio.

I was so proud to have been a part of it, but I didn’t really get to enjoy the fruits of that labor, so to speak.

I actually did go back and play with 8 ½ Souvenirs between 2000-2001. My son was 3 at the time. I realized then that the life of a musician was not something I had the ability to balance with my life as a wife and mother, so I made a choice. I figured one day I may be able to get out there and play music again, or not, but I needed put my efforts into myself and family at that time.

AC: What brought you to Austin in the first place?

KB: I moved to Austin from Houston in 1985 for college. Many of my friends then were wannabe musicians. We would cram ourselves into someone’s dorm room and make music as best we could, but I never thought I could really get out there and do it live. I was way too self-conscious.

AC: How did you finally start taking it more seriously?

KB: My pals started putting bands together and making it happen. I would always ask to join. I wanted to be everybody’s back-up singer. It was Glover Gill that finally called me on it. I can’t even remember how many whiskeys it took to get me up on the stage that first time. Luckily, the high of being up there kept the alcohol from knocking me out until after the show.

Those old college pals, by the way, all are still musicians today: Miles Zuniga, Paul Minor, Jeff Johnston, Jeff Hughes, and Chris Maresh, just to name a few. Kind of cool when I think about it.