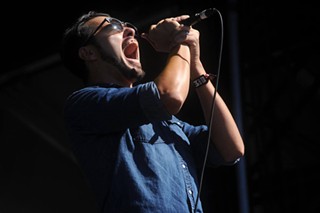 Aaron Behrens has reached a turning point in his career. Still on leave from Austin’s ever-popular Ghostland Observatory, the singer’s vastly different rock band hits full stride this coming week. Catch the Midnight Stroll in-store at Waterloo Wednesday, then Friday at Utopia Fest, and finally on the racks next Tuesday when their debut EP drops.

Austin Chronicle: So where’s your head at right now?

Aaron Behrens: I’m anxious. I’m just ready to hit the road and get on tour. Within the last couple of weeks, I’ve had a drummer drop out and our bass player got sick. I’m like, “Dudes, let’s keep this together!” We’ve got to land this plane somehow, but I might be sitting on the engine by the time we get into it.

Since we did that first show at ACL Fest last year, it was great, then there was nothing going on for a bit, then we did some more shows, then nothing. So it took a bit of time to line up everything, put the correct team together, and now we’ve got this tour sitting in front of us, so let’s do it.

AC: Your new EP didn’t come quickly either. You completed it last year, then started all over again.

AB: Exactly. The first time around, I went in the studio with Matt Drenik and Erik Wofford at Cacophony Recorders. I had Nic Armstrong on guitar, Alex Schroeder on bass, and Don Clark on drums, and I thought it was done. Then when it came time to start putting together a live band, I found Jonas Wilson and the way that dude played guitar made me want to re-record everything. I feel like in this day and age there are guitar players who are good, but he’s got the real knowledge and how he plays with it is unique.

AC: He ended up producing of the new EP, correct?

AB: Yes. He and I went in there and produced the EP and more tracks on top of that as well. He’s great at engineering and recording. I didn’t want to go hire some big name because we knew what this is supposed to sound like. I’m so glad with that choice and going to Bismeaux. That studio is fuckin’ awesome. It’s like stepping into a time machine.

AC: How did the deal with Bismeaux Records happen? You’re working with them, but you have your own label, Skeleton Farm.

AB: When I was doing Ghostland Observatory, Thomas [Turner] really assumed the role of manager and label operator. He wore all those hats and I never really got involved in that stuff. For this, I knew – in order for me to do what I needed to do – I’d have to put a team together. So I was looking for management and I wanted to keep it local so I could be home for a while. I talked to a couple different managers, but when I went over to Bismeaux, it just felt like home.

It has this relaxed atmosphere and Ray [Benson] is a great dude. [Bismeaux business manager] Peter Schwarz is a laid back, no-nonsense guy who happens to be a musician himself. They’ll help me manage my operation, plus they opened the studio up to me and let me record whenever someone wasn’t in there, which was awesome.

We did this deal where I licensed the record to them exclusively, but I still release it under my label, which they help me run. It’s kind of a quick start for my label so I can have worldwide distribution. I want to establish something that I can make a living doing and support my family while making the art that I want to make.

AC: Describe this EP for fans of Ghostland Observatory who don’t know about this quite different group.

AB: It’s hard to explain because the only thing anyone knows of me is Ghostland. It’s not Ghostland at all except for my voice. That’s the connecting factor. It’s stuff that I always did, before and during, but not with Ghostland. The songs were written on an acoustic guitar and I’ve got piano, guitar, bass – all live instrumentation. I feel like it’s a handshake; “Here’s another layer of me. Here’s another dimension of me as an artist.”

They’re really good songs that I'm happy with and I’m not trying to change the world, but I needed to get them out of me.

AC: What did you learn about yourself in the last year and a half while working on this project?

AB: I realized I had to go back to square one with myself. I have to be humble. I can’t lean on, “I'm the singer of Ghostland so I think everybody should listen to this.” I had those moments, but that’s not the way to be. This is a fresh thing and it’s important to understand that people aren’t all going to be super stoked about it. If you believe in something, you have to go wholeheartedly into it and work on it no matter what anybody says.

I re-realized how much I love music and creating art, and it brought me back down to the roots and that’s where I needed to go. My head was in the clouds previously and I just needed to be back down on the ground again.

AC: The song “Keep on Rising” sounds personally triumphant. What were you thinking about when you wrote that?

AB: Putting Ghostland on hiatus was a huge thing for me. It got to the point that I wasn’t mentally healthy or physically healthy and fear really took over me towards the end. I mean, I shaved my head dude – I was obviously in some sort of peril. I found myself scared to death of putting the monster machine on hold for the sake of creating something I felt like I needed to create. Putting down your bread and butter is crazy when you’re supporting a family.

For me, “Keep on Rising” is about getting back on your two legs and riding on to strive for the unknown. It’s me saying, “Fuck fear, you have to answer the call!” It’s a battle cry in a way.