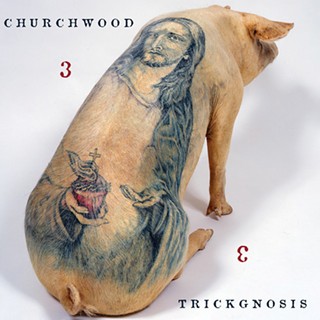 A year after raising heaven and hell on their breakout sophomore LP, local blues punks Churchwood return to the altar for another ritual of musical madness and cerebral rebellion.

Singer Joe Doerr, a distinguished poet and professor at St. Edward’s University, explains the connection between the Christ-pig and the new album’s title.

“Gnosticism, the idea that spiritual knowledge is found within and you don’t need a priest or hierarchy as a middleman, has fascinated me for a long time. Playing with the term ‘Gnosis’ and looking at the pig, of course trichinosis comes to mind – the disease, the illness, the virus that someone can get from having eaten undercooked pork.

“So Trickgnosis struck me as a pun that fit right in with this work and my own interests.”

Churchwood’s latest collection remains tracked on the path of Nick Cave, Tom Waits, and Captain Beefheart, but veers sideways into country, punk, and, in the case of the vibraphone fueled, falsetto-pitched “Triptych,” something you might call island soul drone.

“The notion behind ‘Triptych’ comes from this desire to create a character for myself,” explains Doerr. “In blues mythology and various other cultures, this notion of the seventh son is really powerful. He’s said to possess a kind of Gnostic understanding of the world. It could be thought of as the opposite of the evangelistic approach to discovering the gospel.

“So the seventh son, in all these traditions including the blues tradition, sort of arrives at that just by virtue of being born seventh. He comes to this world a badass, distrustful of authority, and capable of turning the world on its head.”

In reality, Doerr was born fourth of six sons, but in the lyrics, he makes himself a triptych – dividing into three – so he can achieve the Gnostic understanding of the world.