Had Me a Real Good Time

You know it’s a big night at the Sahara Lounge when co-owner Topaz McGarrigle and the staff roll out not one, not two, but three crock pots of downhome cookin’. The parking lot filled up along Webberville Road on Wednesday as booker, promoter, and venue mainstay Jennifer Marchand orchestrated yet another dream show: a hoot night for the Faces and Small Faces. 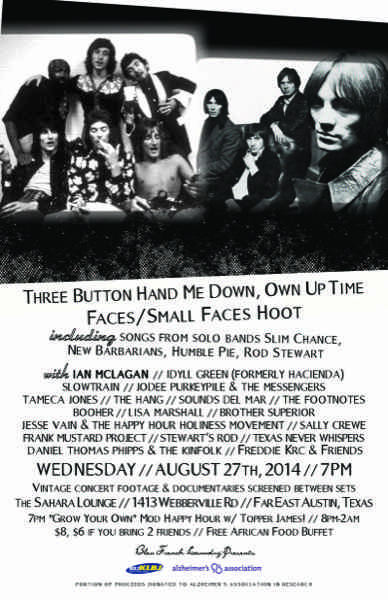 Seventeen acts doubled as “Wicked Messenger” to – roughly – 51 songs covered while Rod Stewart & the Faces – the Final Concert projected onto the wall during set breaks. My three hours included Freddie Krc and Eve Monsees rolling through “Kuschty Rye,” by onetime local Lane, as well as the Footnotes tackling Stewart barn burner “That’s All Right,” and Bryce Clifford of Brother Superior offering up his best take on Rod the Mod during a sweet, sax-filled rendition of the Faces’ “Sweet Lady Mary.”

Later, soul singer Lisa Marshall guided her crew through Humble Pie’s “30 Days in the Hole,” a Marriott FM staple, and her take on “Maggie Mae” would’ve made its author strut like the rooster he once was. Same goes for Adoniram Lipton’s attempt at Stewart’s gravelly croon on “Gasoline Alley” with Slowtrain. Their keyboard-led “Had Me a Real Good Time” summed up the sentiment for everyone.

That includes McLagan, who could be seen hobnobbing with drunk audience members throughout – be it in the back of the crowd or outside. Sometimes lost on the local rock & roll scene is the fact that we’ve got ourselves a true-blue Rock & Roll Hall of Famer living right here in Travis County. Last night was a chance to see him mingle with the young minions.

Flanked by his Bump Band bassist Jon Notarthomas, McLagan paired “Get Yourself Together” with a slow and sweet “Glad & Sorry.” He paid homage to Lane, the man who encouraged him to move to Austin in 1994, with “Debris,” then sashayed through chart-topper “Cindy Incidentally” before closing with “Hello Old Friend,” written in Lane’s memory.

The Sahara stayed quiet throughout McLagan’s set, the party halting briefly. The organist finished and went back to minding his business in the crowd for the remaining 10 acts. Just how many hoot nights can actually boast one of its R&RHOF musicians being feted as an active audience participant? 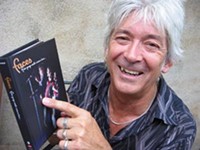