Black news for Scandinavian metal fans: Satyricon have dropped from the Housecore Horror Film Festival. Grindcore pioneers Napalm Death will crush the crowd in their stead.

Consider it a 12-month delay, rather than a disappearance. The Norwegians have cancelled both their Austin appearance and a scheduled performance at Slipknot’s Knotfest in Southern California. According to the HHFF press release earlier this afternoon, they’re now concentrating on new material they’ll be able to play here next fest, because co-founder Phil Anselmo has already invited them back for 2015.

In their place, Birmingham, England, bruisers Napalm Death have a 33-year back catalog to blast through, while tech-death giants Origin add in alongside already announced acts including Eyehategod, Superjoint Ritual, Gwar, and Danzig.

They’ll screen in addition to the already announced As the Palaces Burn, presented by Lamb of God’s Randy Blythe, plus classic horror flicks on 35mm and VHS, and the The Texas Chain Saw Massacre 40th anniversary reunion. 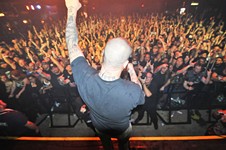