“This past June, Mother Falcon drove over 7,500 miles through the midwest and around the east coast; spent approximately 120 hours in vans; and performed 23 times in some of America’s greatest (and not so great) venues,” writes Tamir Kalifa, the chamber-rock orchestra’s de facto frontman.

“I used five GoPro cameras to capture what it’s like when 13 people hit the road with one common goal: to make music we love and share it as far and wide as we can.”

The fast-moving clip compilation follows the locals from their East Austin nest onto the interstate and up on stages of varying quality. Set to “Marfa,” off last year’s second LP You Knew, the behind-the-scenes footage glimpses Mother Falcon at work and play, unloading their multitudinous gear from the van, carrying instruments amongst skyscrapers, testing the cool waters of the Atlantic Ocean, and delivering typically electrifying performances.

“The majority of touring feels like an exercise in redundancy where time passes quickly or slowly, depending on the music playing in the vans or the absurdity of the conversation at hand,” offers Kalifa. “The countless hours driving, seemingly endless rehearsals, back-and-forth emails coordinating shows and collaborations, hauling heavy gear from venue to venue, extensive sound checks, the text messages wrangling the band, nights spent in a motel or on a hardwood floor somewhere along the way – all for the 45 to 75 minutes we spend onstage in front of an audience.

“This is our fifth tour in our first year of touring and I’m fascinated by how it all unfolds and how, even with our daily routine, each day feels dynamically different.”

Mother Falcon treads on home turf this week with two shows. Wednesday, they iron their black shirts and perform at the Long Center’s intimate Rollins Theater. On Saturday, they unbutton and throw down at the Mohawk, with Magna Carda, Roger Sellers, Chipper Jones, and Growl. 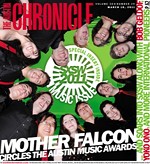