KUTX announced the shake-up of its music snow globe Monday, shuffling the schedule of programming beginning Sept. 1. The changes bring remarkable identity to the musical arm of the University of Texas’ NPR affiliate while jettisoning a few of the programs that made the radio station so unique.

Program Manager Matt Reilly discharged two Sunday staples – longtime KUT deejay Ed Miller’s “Folkways” and the Celtic folk program “Across the Water” – and made big changes to the station’s Friday and Sunday programming, replacing much of the weekend’s daytime shows with what he called “a more modern sound.”

Here’s how their timetable looks now. 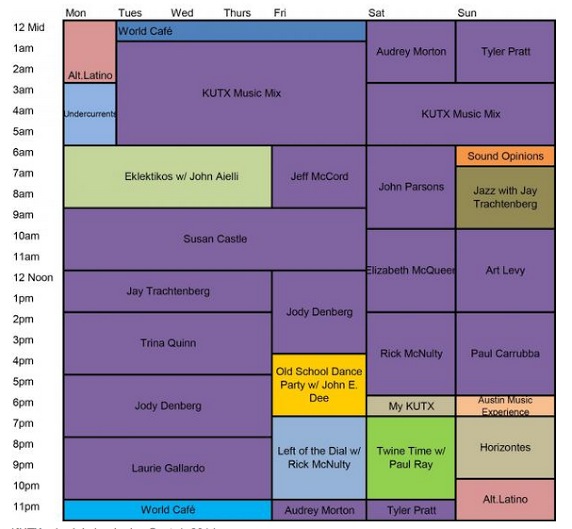 KUTX’s new structure brings an increase of hours for radio veteran Jody Denberg and shifts upcoming female talents Trina Quinn and Elizabeth McQueen into more central time slots. The move also shifts “Eklektikos” host John Aielli back into the early morning, 6-9am shift for the first time in 15 years. Susan Castle, whose humor and charm have been lost on many who don’t turn on the radio until after their morning commute, moves into “Eklektikos” former home, 9am-noon.

The Friday afternoon “Old School Dance Party” with John “E. Dee” Hanson and Texas Radio Hall of Famer Paul Ray’s Saturday evening “Twine Time” remain unchanged, as does Laurie Gallardo’s gig on weekday evenings. Aside from the slicing of an hour from Trachtenberg’s weekday lunch shift, the big losers in this alteration appear to be fans of specialty programming. The new look relegates Michael Crockett’s Latin-themed “Horizontes,” now the Friday afternoon “Dance Party” prelude, to Sunday evenings, and cuts Miller, a 43-year veteran of the KUT framework, completely. “Horizontes” teams with “Alt.Latino,” promoted from its online-only KUTX3 farm system, for an eight-hour block of south of the border sounds. Miller’s absence constitutes a not-so-subtle turning of the corner for the 18-month-old station.

“We’re trying to reflect where Austin is now and where it’s going,” offered Reilly, whose weekday afternoon time slot also leaves the air in two weeks. “Fridays and Sundays don’t line up with the rest of the week. If you’re a new listener, it might be a little confusing. Those days are radically different than they are on, say, Wednesday.”

Miller, a Scottish folk songwriter who moved to Austin for graduate school in the late Sixties and has worked with KUT since 1971 – longer than any on-air personality except for Aielli – isn’t taking the party line on this.

“I think they’re aiming at a young audience and trying to cater to the newer people,” he said 24 hours after his imminent departure came to light. “In doing so, they’ve neglected the longstanding audience that KUT has had for all different kinds of music.”

He points to rotation lists requiring deejays to play music from certain song pools at different points throughout their programs and mentions how few KUTX shows aren’t levied with them now.

Indeed, it’s a little jarring to hear a left fielder like Aielli play Interpol and segue out of a medley of waltzes with the new single from Blitzen Trapper. KUTX has spent the past year-and-a-half celebrating its Austiness and valuation of deejay selectiveness, yet a tune in at this writing finds the same St. Vincent song, “Rattlesnake,” in rotation since February. Easily a Top 10 2014 LP, St. Vincent boast 10 other great songs.

“Most people don’t turn the radio on and listen all day,” contends Reilly. “That doesn’t happen anymore. We have to catch people as much as we can. If we think it’s a great song, we want people to have the opportunity to hear it. We’re saying, ‘We love these songs and want you to hear them.”

Recent playlists and this new schedule suggests those songs KUTX loves are fast becoming staples from festival mainstays like Beck, the Black Keys, The War On Drugs, and Broken Bells. Problem is, in most cases, we’re hearing the same songs over and over. It’s unrealistic to expect full autonomy be granted to each deejay, but the station has stressed throughout its short time on our airwaves that its voices are amongst the most discerning in the country.

You hear it when Paul Ray shuffles through an hour of Memphis soul, or when Jody Denberg lectures a Sunday morning audience on the music of each Beatles progeny. When changes are made for six more rotations of Jack White’s “Lazaretto,” some of us will turn the dial.