"It changed everything really"

“I’ve been running around playing all these shows, but it’s good to be back in Austin. It’s good to be talking about Antone’s and trying to keep this alive. Not just the place, but the music and the vibe and the scene and the culture. So thanks for listening to me blab.” That’s how Gary Clark Jr. signed off from our midnight phone call last week. 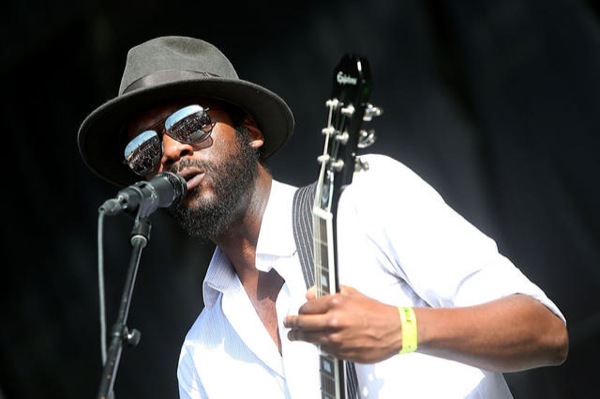 X Games headliner Gary Clark Jr. at the Circuit of the Americas in June (Photo by Gary Miller)

For months, I’d been working to update readers on the historic club, which came under new ownership in November, closed as scheduled after New Years, and is still in the process of reopening. The guitarist’s involvement was the final piece of reporting needed for the issue going to press Wednesday, Aug, 6.

I only expected a short quote about what the “Home of the Blues” meant to the 30-year-old Austin native. Instead, it proved a subject he could speak to only too well. Clark reminisced about his youth, all the old-timers who schooled him, and the last words spoken to him by Clifford Antone before his death in 2006.

Austin Chronicle: What does Antone’s mean to you?

Gary Clark Jr.: Antone’s is a place I learned about from my good friend Eve Monsees. She would talk about it. I went down there with my dad and it was sold out. Buddy Guy, who was someone I’d seen on the Austin City Limits TV show, was playing. We hung outside anyway and just listened. I was in love with it.

The first time I went in, it was the Moeller brothers with the Keller brothers. They had this thing called the Mercy Baby Revue. I loved it. It inspired me to be a better guitar player, a better singer, a better musician.

Antone’s is my foundation. I wouldn’t be doing what I’m doing if it hadn’t been for Antone’s. It allowed me to experiment, explore, and try to better myself as a musician. I was fortunate enough to hear stories and history from Pinetop Perkins and James Cotton. Everything felt so justified. It all made sense when I was at Antone’s.

AC: How old were you when you first played there?

GC: I was 15 years old. My dad took me and Eve down there one night for the anniversary – maybe ’98 or so. I sat in with Hubert Sumlin, Pinetop Perkins, James Cotton, Mojo Buford, George Raines, Calvin “Fuzz” Jones. When I got off stage, Cliff was like, “You got something kid.” He made me feel like I was okay, like I meant something. Like I was part of something.

It changed the way I thought about life and ended my search for acceptance, because I knew this was what I was supposed to do. Clifford Antone told me I’m okay, and Muddy Waters told him he’s okay, and B.B. King told him he’s cool, and Buddy Guy was like, “Cliff Antone’s legit,” and Jimmie Vaughan was like, “Cliff Antone is the guy.” So when “the guy” told me that I was okay, I felt like I was going to be okay regardless of what my parents or my peers thought.

This was the greatest thing that ever happened to me in my life and from that day on, it changed the way I thought about what I was going to do with my life. It changed everything really. I was obsessed. I was there every night. I really wanted to be a part of this thing that Clifford Antone told me I was part of. I wanted to make him proud.

That’s what Antone’s means to me. When I came back home and I walked through the doors of Antone’s, I walked in with two questions for myself: “Did I make Cliff proud?” and “Am I doing this for the right reasons?” Every time I walked in, I was like, “Yes I did. Yes I am,” because I felt accepted.

It’s legendary man! Albert King, Albert Collins, Freddie King – hearing stories about those guys playing and hanging out. It was the best gig anyone had ever seen.

I still walk down these streets in Austin, Texas, and people will come up to me and say, “You remind me of the time I saw such and such and it was one of the greatest experiences I ever had. Thank you for continuing to carry on this tradition.” At 15, I didn’t understand that. At 30, I understand that and it’s even more special.

AC: Does making Clifford Antone proud factor into your involvement with the continuation of Antone’s?

He’s like, “Remember what I told you about Eddie Taylor? These people need to hear some Jimmy Reed.” He was laughing, but at the same time it was serious and heavy and I listened to every word he said because I wouldn’t be there if it weren’t for him. So he walked off and I didn’t play any Jimmy Reed and that was the last time I saw him.

After I heard he passed, I was like “You know what? He was really telling me something.” It wasn’t just him wanting to hear some Jimmy Reed. It was him saying, “Hey man, this is important.” For him to come up in the middle of my set and say, “Play Jimmy Reed,” I know now that was more important than me just getting up here and trying to impress people with some guitar solos. This is a style of music that laid the foundation for everything.

He used to tell me that all the time. Eddie Taylor and Hubert Sumlin, these guys invented rock & roll. And James Cotton – no one can touch him. Pinetop Perkins, he was there. He’s the dude.

I didn’t understand this as a kid, but at 30 – running around and seeing all the things I’ve seen and going to these blues festivals where people talk about Antone’s and the scene in Austin – it always comes back to this place and how special it was. It means everything to me.