When I rang Billy Joe Shaver two weeks ago about his new album Long in the Tooth, which arrives today along with a 5pm in-store performance at Waterloo Records, the 74-year-old country music legend was running late for a gig at John T Floore’s Country Store in Bandera and said he’d have to call me back from “the truck.” 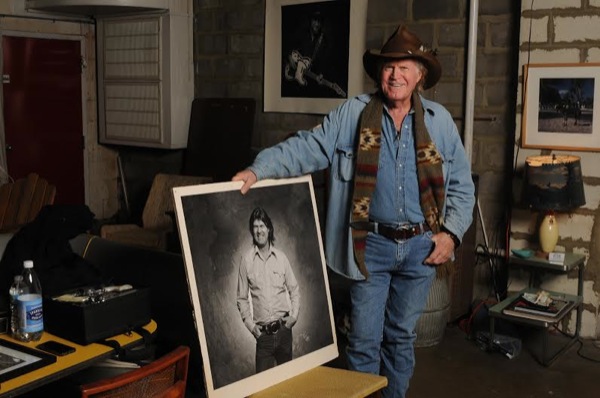 Chunk of Coal: Billy Joe Shaver, then and now.

BJS: No, we got a 15-passenger van. It’s got almost 500,000 miles on it. We used to pull a trailer, but we wanted to bring it all down to one thing and sure enough, it’s better because you can park easier and use less gas. We’re like little Japanese pilots in here though. This will be the third van that I’ve got that will be over 500,00 miles. Still running good too!

AC: I think my favorite song on the new album is “The Git Go.” Where were you when you came up with that line?

BJS: That right there was a challenge to me. I’d been over about that forever because I like a lot of history and people always say, “It’s been like that since the git go.” I thought how in the word would you write that song? I decided to write it because I like a challenge. I got started on it and had a whole lot of it wrote. I went and gave Dickey Betts a chance to help me on it, and he kept slapping my hand every time I’d go to the regular E chord. Finally, I wound up on the E minor and that’s what helped the attitude of the song.

We did it a few years ago on the Live from Billy Bob’s record and pulled it off. None of us in the band thought we did our best at that show, but I must have been good enough because of everyone went kinda cuckoo over it. You can’t hardly hurt a great song. It’s kinda like an egg: any way you cook it, it seems to be alright.

AC: When do the songs come to you? When does inspiration strike?

BJS: Just give me time and they’ll come. Sometimes I just write a little down and make a note of ‘em and come back. I like to get a hold of things that are hard to write – that no one else would think about writing. I’m not trying to prove nothing, I just work better under pressure. That’s why a lot of songs I did were written in the studio. I always write a lot in the studio.

On Tramp on Your Street, an album we recorded in ’89 and came out in ’93, I wrote all those songs really fast with my back up against the wall. “Hottest Thing in Town” is one of the best songs I ever wrote and ain’t nobody tried to even cut it! Course we do it so good maybe we’re running everybody off.

That was thing with Waylon Jennings’ Honky-Tonk Heroes. I wrote that whole album except for one song. It was a double-edged sword because no one else would record the songs because they knew Waylon wouldn’t cover theirs if they did. They still haven’t even though he’s dead!

I got a big write up in Rolling Stone and it said, “The real hero of Honky-Tonk Heroes is Billy Joe Shaver.” Waylon got so fuckin’ mad I thought he was gonna kill me, man! It wasn’t my fault, but he said, “I’ll never do another one of your songs,” and he never did.

AC: What makes a great song? Is there a magic ingredient?

BJS: It’s truth and saying it in as few words as you possibly can to the point where an idiot like me can understand it. You’ve gotta start at the bottom. When I have trouble with a song, I’ll lay it out on the table and visualize it as a letter to someone I care about. Then I’ll realize what I want to say.

AC: What do you think the best song Johnny Cash ever sang was?

AC: What’s the best song there’s ever been?

BJS: That’d be “Amazing Grace.” I don’t think there’s any doubt about it, but coming up in second would be “Crazy” by Willie Nelson.

AC: Did it bother you that two songs you wrote for your new album came out on Willie’s album first?

BJS: Man shit, that don’t bother me none! I can always write another song. I’ve never had that... what do you call it? “Writer’s block” or whatever. I texted Willie that line, “It’s hard to be an outlaw who ain’t wanted anymore,” and he said, “Write that.” I wrote that thing so dang fast it’d make your head spin because I was scared he’d write it first.

AC: Is your new song “Checkers and Chess” about the inequality between the powerful and poor folks?

BJS: It’s a lot about the music industry. They do these funny things. I can’t tell you what all they do because I’ll sound all paranoid, but I’m not. I can tell when someone kills you with kindness and it happens up there a lot. There’s a lot of back stabbin’ going on. Of course, down in Texas you don’t have that because true Texans all have the big egos that they think their shit’s the best in the world and they wouldn’t dare steal anything because they think it ain’t worth a crap. All the people who helped me in Nashville were Texans.

AC: Did you write better on speed or on God?

BJS: The speed just helped me stay up so I could have more fun, but I figure it knocked a whole bunch of years off my writing and my friendships. I don’t think God helps anybody write songs, except maybe “I’m Just an Old Chunk of Coal.” I wrote that right when I was born again and it just came down through me.

AC: In “Long in the Tooth” you sing, “I live up to all those stories been told.” Do you feel like you have a reputation to uphold?

BJS: Half the stories are a blown-up bunch of bullshit. One time these two guys tried to roll me in the alley behind the old Ryman in Nashville and I whuped ‘em and left ‘em lying there. By the time I’d walked to the other end of town, people were already saying I’d beat up five guys, fucked ‘em up so bad, kicked a hole in their damn car – all kinda crazy shit! The more I tried to deny it, the worse it got.

And there’s a guy in Nashville that goes around tellin’ people he’s me! That don’t help me none either. Making out with girls and writing hot checks. Lot of people call me up and say, “Hey man you’re really cookin’ tonight!” I always tell ‘em, “Look at his hand and see if he’s got anything gone.” If he went and chopped his fingers off to be me, he’s a pretty dedicated motherfucker!