Pickathon Polishes Off No. 16

Dispatched from Portland to Ashland, Ore., a drum circle of a city just north of the California border, I needed to get away, so the appeal of a destination festival loomed larger than ever for me this year. Pickathon proved the perfect respite.

Now in its 16th year, Pickathon is as much a vacation as a music festival. It encapsulates the very best of Portlandia: local IPAs on tap, camping, an emphasis on sustainability, and Pine State Biscuits – the Mighty Cone of the Pacific NW. Then there’s the format: a small-batch operation that books each act to play at least twice and in completely different settings.

The three-day festival last weekend in Happy Valley breezed by in a blur of highlights: Diarrhea Planet’s absurdly epic guys’-night-out rock, Valerie June’s Appalachian blues just past midnight on the Starlight stage, Brooklyn’s Woods performing in actual woods, and the Men pounding through the Wurlitzer-heavy Tomorrow’s Hits with such authority that I packed up and drove home after their 3pm set Sunday. It wasn’t getting any better than that.

Here are the rest of this year’s standouts.

Singer Sam France would be the type of cult leader that drinks the Kool-Aid first. He’s an erratic, maniacal frontman with a flair for the dramatic, who suffered an onstage breakdown during SXSW 2012 and botched a set so bad at ACL 2013 that the band canceled the following weekend’s commitment.

Friday night in the Galaxy Barn, Foxygen delivered on the promise of critical breakthrough We Are the 21st Century Ambassadors of Peace & Magic, taking the religious undertones of Spiritualized to an extreme. Shirtless, sweaty, and backed by a sixpiece band with three female vocalists, France performed with commune fervor – profoundly weird and utterly undeniable.

Austin folk singer Konrad Wert is the ideal Pickathon artist: a fiery live performer who travels lightly and stomps to the beat of his own drum. On the 43rd day of his cross-country summer vacation with his wife and two kids – he’s counting – he proved a one-man tent revival, twitchin’, hollerin’, and shuffling through estranged folk ballads with unrivaled intensity. Even in the Galaxy Barn turned afternoon sweat lodge, his a cappella “Older in My Body” gave me goosebumps.

Still “on a mission not to be the cook but to own the kitchen,” Dallas soul hoarder Bobby Patterson made a rare appearance outside a Steve Wertheimer joint – the direct result of the Relatives’ success here last year – backed by half of Black Joe Lewis’s original Honeybears. Let’s just call them the Zach Ernst Appreciation Society. Patterson offered a crash course in Texas soul and threw out more one-liners than Dirty Work. Ural Thomas joined in on Saturday for a nasty rendition of “How Do You Spell Love?”

A soul staple in Portland for decades, Thomas has experienced a similar resurgence locally, with his group the Pain being named Best New Band by the Willamette Week this year. He’s a master of classic SFW soul, as evidenced by his sincere cover of Freddie Scott’s “You Got What I need.” 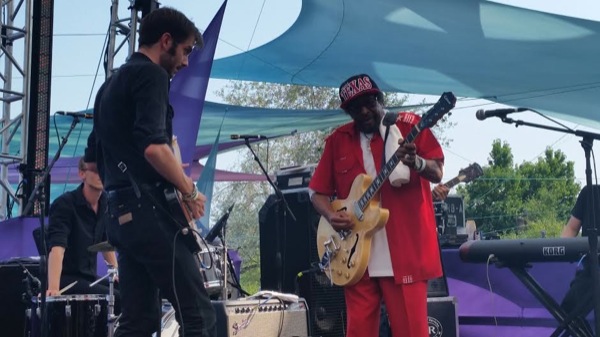 Even live, Unknown Mortal Orchestra still somehow sounds like a warped LP. That’s a good thing. The Portland outfit’s evolved into a true power trio capable of raving up or winding down without ever losing interest or momentum. That elasticity worked particularly well on Ruban Neilson’s high-pitched R&B numbers like “So Good at Being in Trouble.” I considered it a consolation for missing White Denim’s Austin City Limits taping tonight.

Like Father John Misty, Mac DeMarco’s an anti-rock star. He embraces the spotlight as much as he laughs the whole thing off. Or maybe he’s just acting his age (24). At one point Friday, his band busted out a laughable cover of Coldplay’s “Yellow,” then crowd-surfed for three minutes. It wouldn’t work if the songs weren’t there, but this year’s Salad Days proved surprisingly spry live.

I was skeptical of Adrian Quesada’s latest project, Spanish Gold – on disc. The songs didn’t quite seem there. Yet there’s no doubting the onstage chemistry. When My Morning Jacket drummer Patrick Hallahan, Quesada, and former Hacienda howler Dante Schwebel locked into a groove, as in the cocksure strut of “Out on the Street” and Chicano soul of “Stay With Me,” it went off like Santana at the Fillmore.

A few hours later, Quesada returned with Brownout, closing Saturday night with the level of excellence that one comes to expect from the instrumental big band, but it was still thrilling to see them blow over an audience outside of Austin. 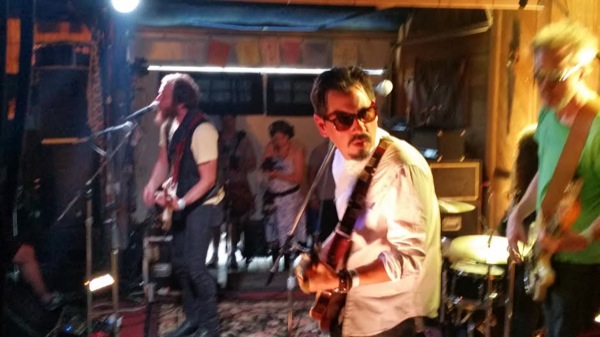 “We have 10 minutes. Okay, we’ll do 15.” It was merely an aside to a stage coordinator, but it doubles as the War on Drugs’ M.O. The band rides a Motorik beat like Tom Petty in a Cadillac: the minutes evaporate. While frontman Adam Granduciel soared two years ago at Pickathon, he really found his voice on this year’s Lost in the Dream. His band’s cover of Bill Fay’s “I Hear You Calling” Friday night reached peak cruising altitude.

Dan Boekner’s latest effort merges the black-hearted electro-rock of Handsome Furs with Divine Fits’ raw immediacy. It’s essentially a solo project, backed by Fits drummer Sam Brown and a Hitchcock blonde on keys. The band has some we’ll-figure-it-out-later kinks to work out, but it managed to win over a peak-afternoon crowd without any recognizable material. That’s no small feat.

Midnight Pickathon
Out in the woods of Portland, Ore., lives a music festival