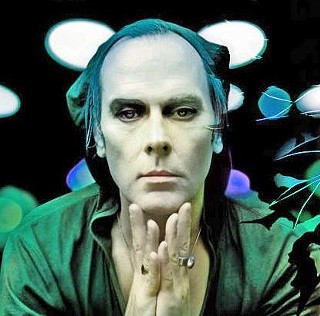 Now 57, the UK native has lived in Turkey for 20 years, with his wife, Beyhan, and children, Hurihan and Adem. He was fighting a cold in Los Angeles when we spoke by telephone. Murphy had just finished two shows in Mexico and was about to pick up in Las Vegas.

Peter Murphy: I did it during last year’s tour, which was the Bauhaus:35 celebration tour, working with the producer Youth in England. He’s in Killing Joke and an old friend. We did it in two very quick sessions, by necessity. Of course, those were the only recordings I did, so it was pretty much like being pushed off the elevator. But it worked out well. It’s a very powerful album, I think. Youth was left to mix it while I was on tour. We were basically doing it on the tip of our feet.

AC: Weren’t you also having to write it while you were in the studio?

PM: That is what we did, yeah. Youth had some backing tracks and some ideas prepared, and then I would hone them with lyrics and song musicality. So, we would then edit them on the spot, and make them work like that. I brought some ideas in, but once I got there, Youth had a lot of ideas pre-prepared, which I thought were great. So, I dove into that very improvistationally, and it worked out very strong. Every day, I would come and listen to some of the rough mixes being done. We were doing three songs per day, so I’d be catching up every day.

AC: I read you were having to learn this album for the tour.

PM: Well, yeah. The mixing of that, there’s a lot of density, orchestration and stuff. So we really had to pick it apart. I only have a fourpiece, so we have to make that work with an element of electronic help, backing tracks. But not so many. We’ve got about six [Lion songs] worked up well. Then it’s all down to making a set that works and flows for the audiences. I’m of course including my own solo work and a couple of Bauhaus songs here and there.

AC: What you’re doing sounds of a piece with Bauhaus, but I notice you’ve developed a fondness for Middle Eastern melodies in your solo career.

PM: Well, that’s something I find interesting. My violin player Emilio DeZefalo-China was the only member of the band who played on the album. Because we were doing it in a very short span, we couldn’t afford to bring everybody in. He would improvise with those elements, and we really liked them, so he used them.

AC: Has living in Turkey nurtured a Middle Eastern element in your music?

PM: Yeah, that element comes in because I’m hearing those scales all the time. It’s not a particular element, in that sense. It’s just a very perfect sound now and again. I think you’re talking about the intro to “My Own Name.” That sound is almost absorbed, really.

AC: Your music has always had an element of high drama to it. Were you a theater or drama student?

PM: No, I wasn’t. But I think I have a natural propensity for that kind of drama. The kind of voice that I have, I do have a low baritone, but I can also get a very high end. So it’s almost operatic by nature. That’s part of creating a character for vocal, really – to try and make different approaches on every song. This way, every range of my voice gets used, and it’s a very powerful voice.

AC: Yes. Plus you’ve always had an influence from the more artistic end of glam rock, as well.

PM: In the early days, definitely. Of course. But that sort of dissipates, really, after a few years. I think I’ve grown away from that. But those were the early influences of the band, yeah, way back in the Eighties.

AC: My friends and I discovered Bauhaus through a concert film on USA Network’s Night Flight series on Friday nights. Bauhaus struck us as being a sort of punk band, actually.

PM: Well, we were just after punk, yeah. It had an audience that was of that, of punk, I suspect initially. We were not necessarily punk. We were a full-sounding band that created something that, as you say, had elements of punk. A lot of the lyrics were not. We worked with a collective, so I would be singing others’ contributions to lyrics. Some of them weren’t what I would have liked to have done, but it was a collective and it had elements of that.

AC: You’ve said Daniel Ash didn’t know how to play guitar when you started the band.

PM: Well, yes, he did! That’s a bit of an exaggeration. We were not Sid Vicious, which is what most punk people were like, but we were learning as we went along and discovering. Daniel’s guitar is massive, in its kind of orchestrated way.

AC: He has an orchestral approach, with a very good use of effects and echoes and things like that.

AC: He can get atonal as hell when he wants to, as well. These are things that have carried over into your own work, as well, as you’ve gone along.

PM: Yeah, that element comes in, because I’m not a musician. But this album, there’s an element of that due to Youth, which I think is great to have. I can just concentrate on being the vocalist again. 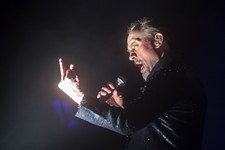