Eve & the Exiles in August

Eve Monsees owns Antone’s Records with husband Mike Buck. A local since she was 8, the guitarist came up with Gary Clark Jr., who thanked her immediately when he won a Grammy. The year she graduated high school, she began Eve & the Exiles with Buck, who she was working with at Antone’s. The couple, along with Forrest Coppack, assumed ownership in 2008.

I hung out with Monsees recently at Antone’s. I’d been blown away by her playing on more than one occasion, but after spending some time with her, I found her personal warmth and enthusiasm for music her most striking qualities. Monsees is completely in the moment and utterly full of joy. 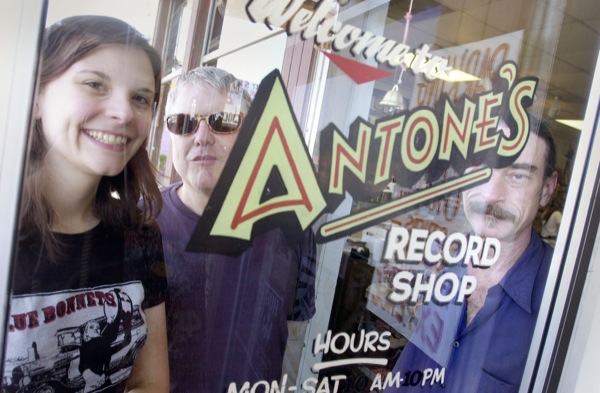 Austin Chronicle: Tell me about what drew you to start playing the guitar and singing?

Eve Monsees: It’s funny, I can’t really pinpoint a moment when I was like, “Okay, I’m going start playing guitar.” Growing up in Austin, I feel like it’s all over the place and all around you. When I was 12, I got a guitar. There was a friend of mine in the neighborhood, this guy named Brett Wheeler, who had been playing a little bit and taking lessons from this guy named Brian Curly, who had played bass with Roky Erickson. So I started taking lessons from Brian as well. He told me a lot about local music, Texas music.

AC: How did you meet Mike Buck?

EM: I don’t know exactly when I met him. I remember seeing him at the record store a bunch because I was always going in there looking for advice on new records when I was first discovering music. And I would also see him at clubs and at gigs, and there were times where we ended up playing together. We would both get hired to play at the same night. The more I learned about music, the more I knew we had in common, so we put a band together, Eve & the Exiles.

AC: How did you come to own Antone's Records?

EM: I started working there in high school. It was my favorite place to shop. I overheard Mike and Forest, who was the manager at the time, talking about how they might need to hire somebody else and I said, “I’ll do it! I’ll do it!” At first, I was working there one day a week. I worked Sunday afternoons. Then gradually I started working more and more shifts to where I was there all the time. After Clifford [Antone] passed, his estate offered Mike, Forest, and I the chance to buy the store for the sake of keeping it running.

AC: Tell me about your love for vinyl and what some of your favorite records are.

EM: The first 45 I remember buying was Elmore James’ “I Can’t Hold Out.” As far as vinyl goes, everybody knows it’s cool, and people are buying it again. It’s really great to see this resurgence. A lot of younger people are buying vinyl. I remember one time when I first starting coming here, my friends were eating at El Patio. A friend of mine’s related to the family that owns it. We were having lunch and I ran over here and bought a record. When I came back everybody was asking me, “Why do you have that?”

They weren’t used to seeing vinyl. Everybody was buying CDs then.

I love the way that vinyl sounds. I love the feel of it. And it’s nostalgic. I buy LPs and 45s, and 45s are fun because you can find really obscure stuff, bands who maybe only put out two songs years ago and that was it – nobody else knew about it. When you come across records like it’s kind of like magic.

AC: You seem comfortable and happy onstage, not looking out of the corner of your eye for the next thing. You also seem really at home in Austin and aren't one of those people looking for the next big record deal.

EM: I’ve never had aspirations to try to make it big. To me it’s about playing the music and having fun playing. Any success that comes from music and playing with people you enjoy playing with is a bonus. I’m pretty happy doing what I’m doing and playing with the people I play with. To me that’s what it’s all about, and obviously it’s great to be able to play larger venues and to larger crowds. I’ve been fortunate to do that a bit and to travel and go overseas several times and see the world. I think it’s so cool to be able to make money getting to play, doing what you love and seeing places you wouldn’t get to go otherwise. That’s it right there: just love the playing.

Catch Eve & the Exiles this Friday, August 1, at Evangeline Cafe (where they play every first Friday of the month), at the Firehouse on August 12, and Guero’s Oak Garden August 23. 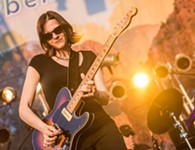