Shaking the ACL Live at the Moody Theater temple Saturday and Sunday, three-and-a-half hours and 31 gut shots all total, Nick Cave & the Bad Seeds alternately caressed and flayed its flock. At the former main event, a sold-out concert prior to the band’s Austin City Limits taping, Cave reached down and rubbed both ears of a man in the front row.

The 56-year-old Australian and longtime Londoner wasn’t washing anyone’s feet either night, but the singer and his sixpiece wrecking crew thundered such righteous punk hubris interspersed with balladic humility that they wore their musical servitude like a collective gold cross. Gospel post-punk? By design – heaven and hell, murmur and shriek, white heat and pitch black.

Two short cat walks on either side of Cave‘s centerstage monitors didn’t merely facilitate the slim, suited frontman poking out into the fervent audience clustered at his feet, they proved a lifeline between leader and followers. Cave, long index finger stabbing repeatedly at individual crowd members, delivered craven blues and bellowed folk into the upturned faces of those closest to him, locking hands and eyes to those reaching – clawing – for him. One man held the headliner’s foot to his shoulder with a pride visible from the balcony, the singer braced against him in full-throated menace. Not Polite to Point? Nick Cave made it a badge of honor Saturday. (Photo by Gary Miller) 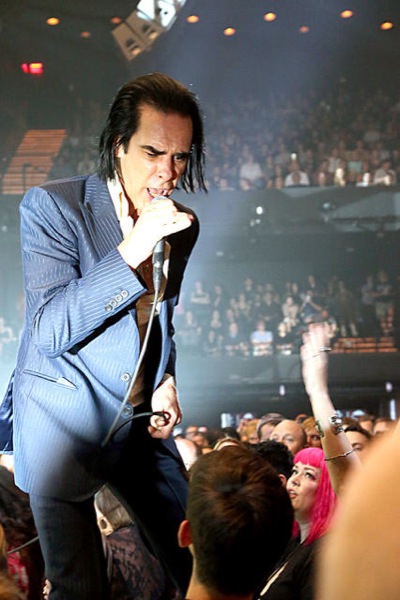 Marionette arms dangling during Jaggeresque scarecrow jolts and punctuated by Iggy Pop-like Spiderman stomps, Cave would summon his best croon then bolt to the piano before unleashing the Bad Seeds’ full roar, which rose in a hellish crescendo for “Jubilee Street,” from last year’s quietly commanding Push the Sky Away. Early blasphemy “Tupelo” repeated the process, as did “Red Right Hand” afterward. Tension and release, glider stealth offset by a jet engine roar.

Where 1994’s Let Love In and Murder Ballads two years later bridged the Bad Seeds’ rabid beginnings with Cave‘s Gothic piano poetry, The Boatman’s Call (1997), No More Shall We Part (2001), and Nocturama (2003) receded with a penitent downturn in volume and rawness. Both LPs with Bad Seeds spin-off/assault team Grinderman and 2008’s Dig, Lazarus, Dig!!! equaled his mid-Nineties peak, but Push the Sky Away finds a middle ground in synthesizers, the title track an organ-coated dirge that could just as easily be rendered in volcanic tones.

New material including the band’s entrance music, the ominous, new millennial burble of “Water’s Edge,” plus standouts “Jubilee Street,” “Higgs Boson Blues,” and “Push the Sky Away” swelled but never burst, that honor going to greatest hits “From Her to Eternity” and profane traditional “Stagger Lee.” Pure piano moments “Into My Arms” and “God is in the House” proved the heart of their own mini set.

Sunday’s ACL taping, another full house at the Moody – some 5,000 people for both performances – featured the same set as Saturday with some of the midsection stripped out – “West Country Girl,” “The Ship Song,” “The Weeping Song” – and minus the encore. The PBS staple got a unique selection in the straight “Love Letter,” as well as some admissions and admonishments:

“This will not appear on the TV show,” growled Cave before “Mermaids,” “because it has the word ‘snatch’ in it.” No similar warning accompanied the NC-17 “Stagger Lee.”

To the people seated in the bleachers: “This one’s for you people here expecting to do nothing – not contributing.”

And while Saturday’s “Higgs Boson Blues” came off as a devilishly humorous ode to Hannah Montana (“Miley Cyrus floats in a swimming pool in Toluca Lake”), outstretched hands on Cave’s chest Sunday as he repeated “Can you hear my heartbeat” came off nothing less than communion. “Stagger Lee” for television? Borderline pornography that received a standing ovation missing from the previous evening. 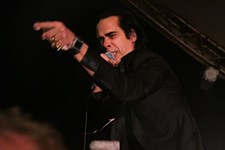