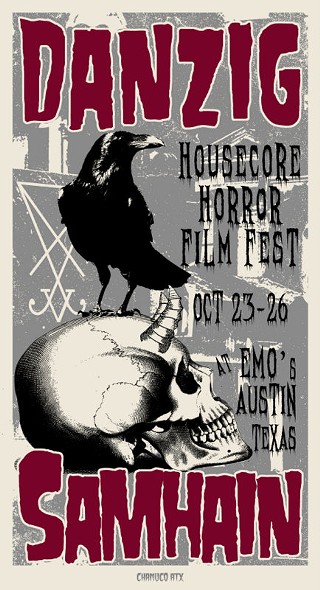 The Housecore Horror Film Festival remains a place for evil and unique fusions, so it makes perfect sense that the master of horror metal, Glenn Danzig, and metal’s favorite comedian, Brian Posehn, have both been added to the Oct. 23-26 lineup.

Put the litigation, French onion soup, and Fun Fun Fun Fest debacle to one side for just a moment. The Evil Elvis remains one of metal’s great pioneers, Danzig I-IV constituting one of the most perfect runs in any genre. Now add in a special performance of Samhain material, his cult-adored post-Misfits beast.

“Glenn has taken me under his [black] wings since I was a young upstart in the music business and he’s a cool mofo!” announced Festival co-founder Phil Anselmo.

As for Posehn, metal fans may recognize him as the tiny dot on the FFF stage three years ago, telling jokes before Slayer. Now the horn-throwing comedian can be laughed at in the fan-friendlier confines of Emo’s.

King Parrot: As we wrote before their SXSW shows, “Forcibly crossbreeding Turbonegro with The Devil’s Rejects on “Shit on the Liver,” the aggressive thrash/grind monsters are hellbent on restoring the humor of Eighties speed metal.”

Skan: Extreme metal from the glowing embers of Austin’s own Skrew.

Dead Earth Politics: Another return from HHFF 2013 by one of our town’s favored metal sons.