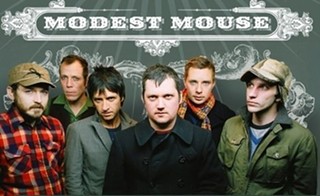 Modest Mouse subs in for Death Cab for Cutie, due back at FFF next year

“We’re pretty confident they’ll show,” said Fun Fun Fun Fest booker Graham Williams in May when I asked him about landing notorious no-shows Death Grips, whose set at the 2013 fall festival was cancelled abruptly when they discontinued all live appearances that year. The gruff hip-hop experimenters performed successfully at FFF in 2011.

You can’t blame Williams for wishful thinking, but it was hardly a shock when, on July 2, the predictably unpredictable trio, which stars MC Ride and drummer Zach Hill, announced their disbandment via a handwritten message on a napkin posted to the group’s Facebook page. It read:

“We are now at our best and so Death Grips is over. We have officially stopped. All currently scheduled live dates are cancelled. Our upcoming double album, The Powers That B, will still be delivered worldwide later this year via Harvest/Third Worlds Records. Death Grips was and always has been a conceptual art exhibition anchored by sound and vision, above and beyond a ‘band.’

Fun Fun Fun Fest organizers turned the cancellation into good publicity with a napkin note of their own, which was picked up by Rolling Stone and Spin:

“We are now at our super best and so our relationship with Death Grips is finally over. We have decided to consciously uncouple forever after being stood up twice at the altar. We had to look deep into our soul and ask if Death Grips really loves us or is capable of loving anyone and the unfortunate answer is no. We are better than that. So we have officially stopped following Death Grips on Twitter out of fear of seeing them at another show or with other fans. It’s just too soon.

“Our upcoming fest in November will still happen and with a replacement that loves you and us for who we really are. FFF was and always has been a full-on mental, physical, and cerebral sensory overload fiesta of delight anchored by butt-shaking, head-banging good times – above and beyond a ‘Fest.’ We deserve real love, and so do you.

“To our truest fans, please stay epic... and stay tuned.”

What we were staying tuned for came this morning when the noise rappers’ Black stage slot was given to FFF alums the Murder City Devils, whose tremendous 2011 set preceded the Danzig freakout. The veteran punks release a long awaited new LP, The White Ghost Has Blood on Its Hands Again, August 5.

While everyone was prepared for that impending switcheroo, the real surprise occurred on the Orange stage, with headliner Death Cab for Cutie also falling off the Nov. 7-9 lineup.

“Due to unforeseen circumstances, Death Cab for Cutie had to cancel their performance,” reads this morning’s press release from the festival. “The band is very sad to miss out on FFF, and they look forward to returning to Austin in 2015.”

Death Cab will be replaced by fellow Washington Staters Modest Mouse, who are making their inaugural FFF appearance.

This isn’t the first time FFF organizers have had to deal with a major talent drop-out. In 2010, Devo cancelled two weeks before the festival when guitarist Bob Mothersbaugh injured his hand. The Descendents proved a more than suitable replacement.