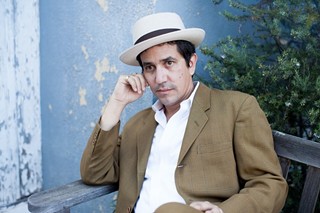 A.J. Croce returns to Austin on Saturday at the Strange Brew thanks to February’s Twelve Tales. His father Jim Croce (“Time in a Bottle,” “Bad, Bad, Leroy Brown”) died in a 1973 plane crash when he was 2, but A.J. Croce’s been his own musician since the beginning, a dynamic performer and songwriter moving from blues to pop with ease and skill.

I spoke to Croce from his home in San Diego.

Austin Chronicle: Let’s talk about having six different producers and studios for your latest album.

I didn’t want to impose my idea of how something should be on the producer. I gave them all raw demos without any of my production because I didn’t want anything to get in the way of what they would imagine. I went one producer and each song at a time, releasing a single a month on iTunes.

AC: You also have your own label. What inspired that?

AJC: My first two records were on a major label. I was on BMG and then when my label folded in 1996 my deal was over. I remember getting the call the day after I heard that everyone had been fired at the label. Then I got a call from a company out of Germany, saying, “Hey, would you be willing to do a blues record?” They didn’t know that my label had folded. They didn’t even know if I was signed or unsigned. It was perfect timing.

AC: It came time for your artist freedom and autonomy?

AJC: Yes, from that moment on I was an independent artist. It took a while to find the right home. Eventually I got a call from Yep Roc and they told me that they would help me start my own label. I took all that experience that I had from recording and promoting – radio – and the experience I had with publishing music I had been working on since I was 18. I put all of that knowledge into a label.

AC: What attracts you to the blues?

AJC: What draws me to it most is the first time I heard a blues scale when I was really young. There was just something there when I learned to play it. I was on a piano and I was just like, “Oh I got to learn how to play that” and I did.

AC: You were playing the blues professionally beginning at quite a young age.

AJC: I toured as an opener for B.B. King when I was 18 years old after the release of my first record.

AC: How do you feel about the constant questions you must get about your father?

AJC: There are aspects of it that are really amazing and great. When I started off as a teenager, I really did everything I could to avoid those questions. I’m happy and proud of my father for achieving that something that makes people’s world a better place because of what he did.

On the other hand, he died when I was just 2, so I didn’t know him and I came to know him the way that his fans came to know him. Of course, I also had my grandmother and my uncle and my mother and all the family that told my stories about him, so in that regard I know a lot more than his fans.

But the fact is I just didn’t know him that well, so for me to be able to share aspects of his personal life I don’t know what to say.