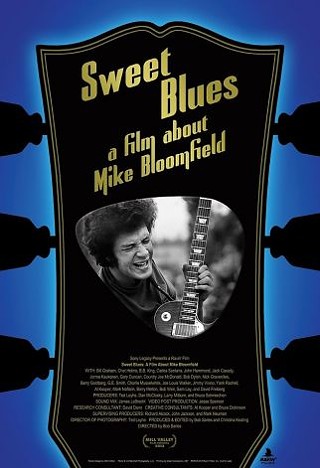 After watching Sweet Blues: A Film About Michael Bloomfield from the new box set on the guitarist, From His Head to His Heart to His Hands – reviewed in this week’s issue – I had questions about it. Legacy Records then put me in touch with the film’s producer/director, Bob Sarles. His response was so illuminating it’s worth sharing:

My name is Bob Sarles and I produced, directed, and edited the Bloomfield documentary included in the new box set. I made the project together with my wife Christina Keating, who co-produced and co-edited the project with me through our small production company Ravin’ Films, Inc.

Ravin’ Films, based out of San Francisco and Los Angeles, produces music related content including documentaries, concerts films, television programs, museum films, DVDs, EPKs, and music videos. More about our company can be found [here]. In addition to my work through Ravin’ Films, I also make my living working as a freelance documentary film and television editor.

I was huge a fan of Michael’s music from my high school years. After his death, when I was beginning my career as a film editor, I was motivated to make a documentary about his life and his music. I began conducting interviews for the Bloomfield project in the late Eighties, with the intent of making a full, feature-length film about the artist. The earliest interviews conducted were with B.B. King, Al Kooper, and Bill Graham. The most recent interviews, done within the past few years, include Nick Gravenites and Michael’s brother Allen.

I never raised the money to work on the project full time, so I grabbed interviews when I could over the years and befriended Allen [Bloomfield] and many in Michael’s circle of musician friends. Often, when I was making films about other subjects, I would have the opportunity to grab a few words with an artist about Michael that I could possibly use in the film. Over the years I gathered many hours of interviews, photographs, and performance footage but still never found an angel who would bankroll the completion of the film. I knew that it would take at least a couple of hundred thousand dollars just to clear the music, photos, and archival footage costs. So, the film remained unfinished.

A year ago, Al Kooper, who I was friendly with from the project, called me and suggested that I might be able to put together a slightly less ambitious version of my film to be included in the box set he was producing for Sony Legacy. I jumped at the chance. It was clear that because of the economics of this product that the record company wasn’t going to bankroll the film I originally envisioned, but with the modest budget they gave me we were able to fashion an hour-long documentary that told Michael’s story in a compelling manner that felt complete.

We tapped famed photographer Jim Marshall’s amazing portfolio of Bloomfield photos as well as material given to us by Mike’s longtime friend and producer Norman Dayron. And, although we didn’t have the resources to include a lot of live, on-camera performance, we were able to include two incredible performances: one of Electric Flag at the Monterey Pop Festival in 1967 and another solo performance at NYC’s Bottom Line club shot in 1980, not long before Michael’s untimely demise. Both performances are included in their entirety, not as short clips.

Sony was excellent in clearing all of the music I used in this version of the film, and there’s a lot of music in the soundtrack.

Although I still retain the rights to finish the long version of the film as I would like to, I proudly stand behind Sweet Blues: A Film About Mike Bloomfield as a fully realized work. The film premiered at last fall’s Mill Valley Film Festival with three sold-out screenings. I was very happy to have the film premiere in Mill Vallley, as it was Michael’s longtime home from 1967 till his death in 1981.

I am very gratified with the excellent reception the film and the entire box set has received. And I am thrilled at how well the box set is selling. I am very grateful to Al Kooper and the folks at Sony for allowing me to be able to complete Sweet Blues.

I’m still open to finishing the long version of the film. I have so much more of the story to tell. And there are more performance clips I’d love to be able to include. So, if you know anyone with deep pockets.... 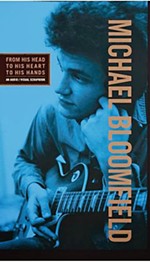