Austin City Limits: This is 40 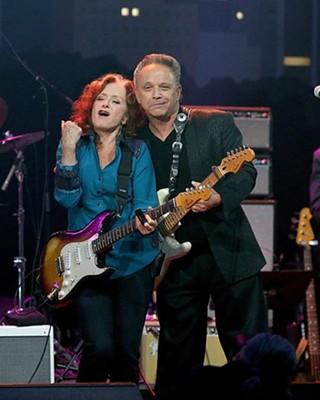 For its 40th anniversary party at ACL Live at the Moody Theater last night, Austin City Limits returned to its roots. No Coldplay. No Nine Inch Nails. Simply two long sets of high-powered roots and blues from superstar and rising star musicians playing from deep in the heart.

The program’s only nod to the past decade or so of lending its stage to modern rock and pop acts was an appearance by the Foo Fighters on video. The Dave Grohl-led quartet performed a manic version of Roky Erikson’s “Two Headed Dog,” taped at the original ACL stage on the University of Texas campus.

Executive producer Terry Lickona and KGSR deejay/music writer Andy Langer did a masteful job of keeping the audience occupied during set changes. When the cameras were rolling, actor/musician Jeff Bridges and pop diva Sheryl Crow both introduced performers and took part on the musical end as well.

Bonnie Raitt started things off with a blast. Joined by Jimmie Vaughan, Gary Clark Jr, Brittany Howard of Alabama Shakes, and the Grupo Fantasma horns, the beloved redhead bounded through the Fabulous Thunderbirds’ “Wrap It Up,” her slide solo a hefty foil to Clark’s lean yet potent blues. She followed with an inspired cover of Little Willie John’s “Your Good Thing (Is About to End),” demonstrating that at 64, the guitarist has lost none of her vitality or charm.

Crow and Kris Kristofferson then attempted his most famous song, “Me and Bobby McGee,” with Crow overwhelming the songwriter vocally. While looking a bit frail and distant, Kristofferson redeemed himself with a billowing rendition of “The Pilgrim: Chapter 33.”

In one of the most touching moments of the evening, Bridges performed two songs written by Austin’s Stephen Bruton. He explained how they had been friends before collaborating on the film Crazy Heart, one of Bruton’s last projects before passing away of cancer in 2009.

“He was my teacher, my preacher, my rock,” proclaimed Bridges before launching into a lusty “What a Little Bit of Love Can Do.”

As a way to honor some of the musicians that have made Austin City Limits the longest lasting music show on television, the program created a Hall of Fame this year. The first induction ceremony took place at the original studio 6A in April, with the initial inductees being show creator Bill Arhos, Willie Nelson, UT football coach and avid supporter Darrell Royal, and Stevie Ray Vaughan & Double Trouble. Lickona introduced video from the event, which will be edited together with last night’s performances into a two-hour special airing October 3.

The first set ended with some new blood. Alabama Shakes took the stage for a couple of tunes, mixing gritty soul and scruffy jams. Then Gary Clark Jr. caused an electric rumble with his best known tune, “Bright Lights,” which left the full house shaking the seats

Grupo Fantasma began the second set with an impossibly funky Latin jolt titled “Mulato.” Their percussion locked tight with an expanded horn section, and one of Austin’s best bands sounded even better. Jimmie Vaughan dueted with Raitt on a slinky “The Pleasure’s All Mine,” another opportunity for them to trade swaggering blues licks. Things oozed swampy when Clark and Doyle Bramhall II joined in for “Early in the Morning.”

Crow and Bramhall were once an item apparently, so their teaming on her “I Can’t Cry Anymore” might have doubled as celebrity news. There might have even been a message when he next performed “I’m Leaving.” Yet Crow’s devotion to Texas acts couldn’t have been more unequivocal than when she brought out Clark for a sweet acoustic reading of Elizabeth Cotton’s “Freight Train.”

Robert Earl Keen and Joe Ely moved things into the final stretch with a rousing rendition of Keen’s “The Road Goes On Forever.” Having both performed the tune too many times to count, their alternate voicing on the scenario where “the party never ends” felt singular. The band for most of the show was made up of Keen’s regulars: Rich Brotherton (guitar/mandolin), Lloyd Maines (pedal steel), Glenn Fukanaga (bass), Riley Osbourn (keyboards), David Grissom (guitar), and Tom Van Schiak (drums). Rightly praised throughout the night, they powered through Keen’s “I Gotta Go” and Ely’s “All Just to Get to You” with rare intensity.

Lickona appeared to make a special announcement, inducting Maines into the ACL Hall of Fame. By their count, he’s appeared on the program more than any other performer, backing everyone from Terry Allen to Terri Hendrix. Ely spoke of their Lubbock connection, while Keen offered a righteously funny poem titled “I Wanna Be Lloyd.” For his part, Maines seemed stunned, saying with a coy smile, “I never wanted to be in the spotlight, but I could get used to this.”

Ely then closed things out by leading the entire ensemble through a breakaway version of another Texas legend, Buddy Holly’s “Not Fade Away.” Everyone got a solo, and the audience danced its way out the doors. How Austin City Limits will edit four monstrous hours of supreme music (see the photo gallery) into a two-hour special will be fascinating to see.