Jimmy Scott: Always All the Way 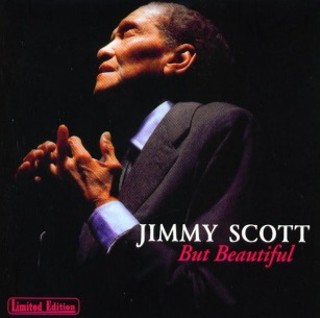 When a new and powerful presence enters your life, it is time to be still and let it overwhelm you. There can be no resistance to stop it and it would be foolish to try.

The first time I saw Jimmy Scott sing, I had been looking for him over six months. In December 1988, the Village Voice ran a long story by Jimmy McDonough titled “Jimmy Scott: For Whatever the Reasons.” It remains the best feature I’ve ever read, so compelling that I sensed that somehow someday Jimmy Scott would become a part of my life.

Over the next several months every time I’d visit New York I would look in the newspapers to see if Scott was performing. I didn’t know any other way to find him. And, finally, in July ’89 there it was in the New York Times: a paragraph promoting his engagement at the Ballroom on West 28th Street. It started, “Little Jimmy Scott, now in his Sixties, first became known as a singer with Lionel Hampton’s band in 1948.” A dream was coming true, and I’ve saved that small yellowing newsprint as a sort of talisman, one that led to so many adventures with an artist who changed my life.

Taking a taxicab to the club, I had no idea what to expect. The Ballroom was a big and semi-swanky room, able to seat about 200 people. When I entered that evening, there were only four people there, sitting together at a table in front. Taking a seat next to them, I made the crowd a total of five people. A few minutes later, Jimmy Scott walked to the front of the stage. It took him awhile, because he swayed back and forth as he moved forward with a look of slight pain, but gave a sweet and understanding smile to his tiny audience. He walked like he sang, slow and deliberate and with a presence I’d never really seen or heard before. It was obvious he had been a veteran of countless disappointments but would never fall to their pull. He had the aura of not only a survivor, but a thriver.

His first song, “All of Me,” was probably meant as a swinging introduction, but the way Jimmy Scott sang and moved it became a devastating glimpse into a whole other world. His voice, high and overflowing with emotion, came from another universe. And his body movements were like he was a marionette whose strings were controlled by an extraterrestrial. His arms would move around his body with a logic all their own, flying outward at odd moments and then hanging in space as if they were floating in thin air. Scott’s vocal delivery rewrote the rules of time, and this was only the first song. For the next hour, each selection was a missile to the heart, opening an invisible wound until all five listeners may have well have been laying on the floor by the end of the evening.

I have seen just about everything, but I have never seen a performance like Jimmy Scott’s. He brought out feelings in me beyond sadness and pain, turning hardships into the very thing that makes life worthwhile. Jimmy Scott, a man who was born with Kallman Syndrome, which kept him from growing past five feet until he was in his 30s, showed me a glimpse directly inside his soul. Even tears would have seemed trivial as a response. Instead, I was left speechless when finally he seemed to float offstage. I could not move, and felt I’d been hit by a stun gun of absolutely pure emotion.

For the first and only time in my life, I journeyed to the singer’s dressing room to try and tell him how overwhelmed I was. It was the best show I’d ever seen, transporting me to another realm of life. I was probably babbling by then, but Jimmy Scott just smiled and patted my hand, adding “Thanks, babe” to the end of my embarrassing testimony. I also did something I’ve never done before or since: I promised to try and help him find a recording deal. Something higher called to me that summer night, and I knew there was no turning back. When you sign on with someone like Jimmy Scott, it’s for life. Luckily for me that’s just how it ended up. When Scott passed away on June 12, we had stayed close for 25 years, sometimes working together and other times just talking on the phone. Everything was an exercise in feeling and learning, something only the truest jazz heroes can teach. And it almost didn’t happen.

After that first show in ‘89, I tried every trick I could at Warner Bros. Records, where I worked, to get someone to go see Jimmy Scott sing. I knew if they saw him they would feel what I felt. The odds, as they say, were against me. He was at an age that was off-limits for most labels, let alone the fact that he’d made records in the past that failed. Many people even believed Scott was already dead. When he was forced to leave the music business in the early Seventies, he became a shipping clerk at a Cleveland hotel , a waiter and then a ward captain in the Democratic Party. But then, in the mid-Eighties, he was pulled back to the stage, and with writer Jimmy McDonough’s help he started the slow battle to come back. Still, I was speechless that my bosses did not want to hear about Scott’s undeniable greatness. For them, he was over and my exhortations likely were viewed with kind patience and, ultimately, total rejection.

Little did they know a dead man would get Jimmy Scott a record deal. The fabled songwriter Doc Pomus had tried for many years to find a label home for Scott, all to no avail. But being a man of storied vision, Pomus had arranged that when he passed away, the singer would perform at his funeral service, knowing that all the record executives would attend. Exactly that happened when Doc Pomus died in 1991. With Dr. John accompanying him on organ, Jimmy Scott sang “Someone to Watch Over Me.” Within a matter of weeks, Scott got a recording contract with Sire/Warner Bros. Records, courtesy of Seymour Stein and Joe McEwen.

A whole new world was getting ready to open up for the singer. As Scott said then, “Doc done reached up out the grave and snatched me a record deal.” It was like a very real fairy tale to watch it happen. When the sessions for the first album began in New York, producer Tommy LiPuma had assembled a group that included pianist Kenny Barron, bassist Ron Carter and drummer Grady Tate. Sitting in the Power Station watching Jimmy Scott sing “All the Way,” “Every Time We Say Goodbye,” “My Foolish Heart,” “Angel Eyes” and others was to understand levitation.

The singer was in a vocal booth in the back of the studio while the band was in the large studio room, but his voice electrified everyone. Glances were exchanged between the players like they couldn’t believe what they were hearing. Arranger Johnny Mandel just shook his head in wonder, knowing the string arrangements he’d soon write would be the final heavenly touch. When the collection was released in 1992 and earned a Grammy Award nomination for Jazz Vocal Album of the Year, Scott took it all in stride. For his true fans, those who probably never took the leap of faith that this would happen again, it was like the ultimate musical gift.

It was also the start of so many twists and turns it often felt like cultural whiplash being Jimmy Scott’s publicist during those years. Before that debut “All the Way,” was released, though, Jimmy Scott had a mission and invited me onboard. Picking him up at his home in East Orange, NJ, that winter of ’92, we headed straight for Newark. He wanted to find a big house to purchase, one where he’d be able to reunite his scattered brothers and sisters. Their mother had been hit by a car and killed when Scott was only 13, and the children had been scattered into various foster homes when their father soon left.

For Jimmy Scott, it had been a lifelong ambition to have all the children together under one roof again, never mind they were all grown and had their own lives to lead. We drove all day around Newark into some very questionable neighborhoods, as Scott told me of his plans to use his record royalties for the home and hopefully an adjacent community center. The dreams were all in Technicolor for the singer, and I could tell Jimmy Scott would not be stopped. All the years of awards shows, world tours, documentaries and acclaim were ahead of him. Today, though, he wanted to return the love he felt for his family.

We were floating on a cloud that afternoon, and I will never forget the tears in his eyes as he talked about his love for his mother. When Jimmy got out of the car at the end of the day, I asked him to autograph an album cover for me. He gave me a quick smile, looking directly into my eyes, and signed on the All the Way jacket, “To Bill, Love always, James Victor Scott (Justine’s son).”

I still have it, and whenever I look at it I get the same chills I got the first time I saw Jimmy Scott perform at the Ballroom a quarter century ago. Those feelings never go away, and for that I realize this man will live forever in those who found a world of warmth inside that voice. He took us all the way – always.