Virtuosic violinist gets Handsome at the Paramount tonight

Fiddler Andrew Bird wants you to know two things: who the Handsome Family is, and that he can sing. His performance tonight at the Paramount should cover both of those entities, as he takes a batch of the Handsome Family tracks with a new, full-throated sound.

Austin Chronicle: You’ve covered the Handsome Family at shows and recorded a few of their songs. What all had you done prior to working on an entire album of Handsome Family covers?

Andrew Bird: I did “Giant of Illinois” for the Dark Was the Night Compilation, and I’ve been doing a lot of their songs for the past 15 years.

AC: Do remember the first song of theirs that you took on?

AB: I think it was either “Giant of Illinois” or “Don’t Be Scared.” I can’t remember. The first one I heard that kind of hooked me, kind of drew me into what they do, was “The Giant of Illinois.” In particularly that line, “The sky was a woman’s arm.” That’s a typical line of theirs that is a little bit ambiguous and mysterious and awesome. Every time I sing that song I feel like I could sing it the rest of my life because I’ll never quite know what it means, but it has such emotional heft to it.

AC: Does the ambiguity of their songwriting make it easier to put your mark on it?

AB: For sure. I like having discussions with Rennie Sparks, who writes [Handsome Family’s] lyrics, about what I think they mean. It’s similar to the way I write my own songs. They’re kind of tangential conversations either with myself or with other people, that kind of end up in the songs. A typical conversation with her will take the same course. ‘What do you think this means?’ Then next thing you know we’re talking about something completely different. So that’s why I like the cover their songs. They remind me what to strive for in my own writing, too.

AC: How much light does Rennie shed on her songwriting when you’re having these conversations with her?

AB: It tends to just deepen the mystery. Which is totally fine. I don’t like getting the answers. I never have. When there is a song that has an answer in it for you, there is no point in doing it anymore. The quest is over. I like songs that ask questions and trust you, the listener, to figure it out yourself.

AC: Do you feel like you come up with answers in your own songs?

AB: No, no, no. It starts with one question, then at the end you have three or four. I’ve just never been like that. I don’t like math for that reason. [Laughs] I like doing old ballads where there is a narrative, a beginning, middle and end, but I don’t like writing that way. I feel like songwriting is a good medium to do this in. You only have three minutes, and there’s no hope in answering any questions in three minutes, so it’s best to just start a conversation.

AC: I know you’ve toured with the Handsome Family before. Was it strange at all to work with someone’s material when you have a personal relationship with them?

AB: No. You know it’s always good to have your standby. Your favorite poet, or your favorite novelist, or your favorite songwriter to check in with every once in a while to make sure you’re still on track, and to get a little inspiration. That’s what they are for me. But to answer your question, it’s liberating to do their songs, because I haven’t written them. I feel like I can get somewhere vocally, which was my main goal with this record was to get something that’s been elusive. I feel like I can sing differently with someone else’s material. And I think a lot of artists would probably agree with that. When you’ve conceived the song from scratch, when you’ve birthed this thing and it’s been living with you for years, it can be a bit burdened. When it’s someone else’s, the challenge is there to say ‘where can I take this? How can I make this song as great as it is?’ That’s my goal with this record is to have people realize how good the material is, and I like that challenge.

AC: So is there a freedom in detachment working with other people’s stuff?

AB:  For sure, yeah. But I don’t think there’s doing someone else’s material if you’re going to do it in a faithful way. There’s no point in covering songs that are very familiar to people. If I were asked to do, for example, a Bob Dylan song, I would make sure it wasn’t recognizable as Bob Dylan. I feel like the whole point of it all is why would you even start this process unless you’re going to bring something new to it. I can’t remember the question, but that’s where I ended up.

AC: What do you think you’ve brought that’s new to The Handsome Family with this record?

AB: I tell a lot of people about The Handsome Family and how awesome they are, but unless you’re into a very particular brand of kind of Gothic imagery, you might not be able to get past it to realize that the songwriting is really on, you know. Imagine you don’t know who The Handsome Family is and you don’t know who I am, for that matter, just someone appears out of nowhere with this collection of songs and you just assume that they wrote them. Because we kind of expect a singer-songwriter to have lived what they’re writing about now.

What’s cool about them is that it is a husband-wife duo, she writes the lyrics, he writes the melodies. The division of labor is kind of old school, like great songwriting teams from the Twenties through the Sixties. Anyway, these songs that have appeared, how will they be perceived? And I think they really belong up there with John Prine, Townes Van Zandt and Leonard Cohen. They’re at that level. The lyricism is so strong. They do what the best John Prine song would do, which is distill some sort of emotional idea into a really dense couple of words. They’re just really simple words, but there is a slight twist to them that make you pay more attention, and almost every one of their songs does that. I just wanted to bring that to a larger audience.

AC: Did you do any of your own songwriting during this process?

AB: At the same time, you mean?

AC: Yeah, or at least after you’d conceived the idea.

AB: Yeah, but to be honest it’s occupying the same space as my own writing, and I was pretty eager to clear that space out finally. The anticipation for making this record was more intense than doing my own record, because I was kind of eager to get them down so I could get back to my own stuff. But yeah, I feel like when I’m working on their songs I’m feeding it into the same process, the same mill as when I’m working on my own songs. But yes, I’m writing every day.

AC: Did working with their material so closely have an affect on your own songwriting?

AB: Yeah, for sure. I make records between my own records that teach me a little bit how to further get along whatever I think is some sort of continuum. And it feel like the final thing I haven’t nailed after 12 of my own records is the singing. I know I can sing better than what has been captured on record, and that was part of seeking as well as finally getting these songs down. But I wanted to get that big, full-throated singing that I know I can do.

AC: As far as the tour goes, do you think it would be a different crowd than a regular Andrew Bird show?

AB: I doubt it. I don’t have those expectations. I think I’ll draw my crowd that I’ve built over 20 years of touring, which has come to expect the unexpected anyway. That being said, this particular outfit, this ensemble, it is new and kind of coming full-circle to the more rooted material than maybe some of my more out there stuff. The Hands of Glory, Tiff Merritt and Mark Haywood, it’s the perfect group to do The Handsome Family songs. But it’s been cool to have them also do some of my old songs as well and have a take on that.

I would like to mix tambors and instruments depending on who I’m playing with, and I’ve been playing with Eric Haywood on pedal steel. But the pedal steel and the fiddle playing lines together is a really cool timbre we’ve been exploring. We just started touring, but I am hearing things and thinking, ‘Oh, that’s not what I thought it would be.’ 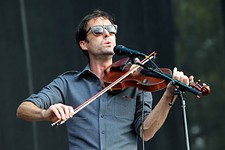