The word “Utopia” signifies an idyllic society, but its Latin root actually means “No Place.” Both apply to September’s hill country camping and music outing, Utopia Fest, now in its sixth year. Wednesday’s lineup announcement guaranteed me another adventure-filled weekend there. 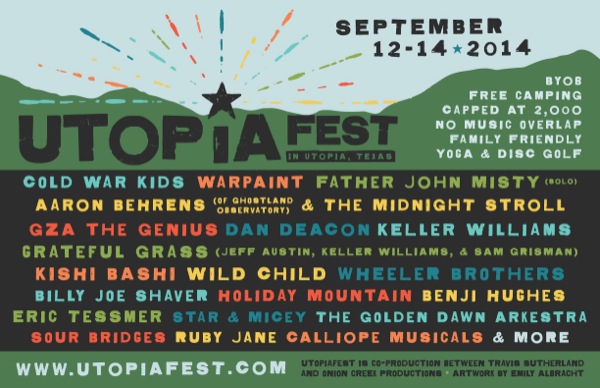 It’s a heavenly scene: spacious because of its capped attendance of 2,000, smartly organized on two stages with no overlapping music, cheap because you can bring your own booze, and peaceful because the security’s mellow. It’s also in the middle of nowhere.

That’s actually part of the reason I make the three-hour drive into desolation every year. The hang’s incredible, an unpretentious and friendly mix of Austinites and families from the Utopia area. The atmosphere remains special enough that the music almost ranks second. Then again, each of the last couple years I’ve come away having witnessed a transformative performance.

In 2012, that was soul singer Charles Bradley. The 65-year-old Florida native getting his first real taste of success cried his heart out in a downpour. Last year, it was the smart pop harmonies of Lucius, who were on the cusp of a national breakout.

Utopia Fest founder Travis Sutherland tells the Chronicle passes are selling fast and he expects sales to max out earlier than in the previous two years. Clear your schedule for Sept. 12-14 now. Wristbands are $120 for Friday and Saturday.

Tickets for a Thursday night pre-party, featuring Keller Williams, Golden Dawn Arkestra, and Calliope Musicals, are sold separately for $30. A handful of acts will be added in coming weeks. Current lineup and tickets are available here.