Almost exclusively white faces, as fine as they are 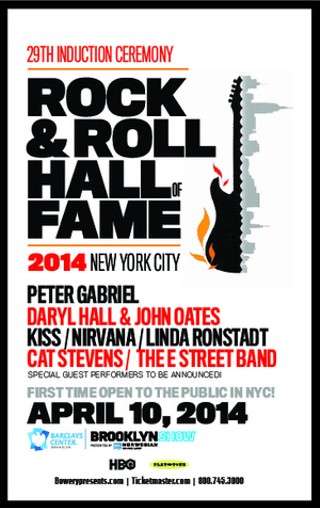 Even at its most pompous, elitist, self-aggrandizing, and racist, the Rock & Roll Hall of Fame betrays a glimmer of hope. After many takeaways from the three-hour HBO taping, showing numerous times this month, the closing highlight reel rewinds only three notable African-Americans in the entire show. Blacks did, after all, invent the genre.

Starting with a clip montage only the Oscars could touch (ditto for In Memoriam later), the kick-off of Chris Martin inducting Peter Gabriel initially feels like the broadcast hitting an iceberg right out of the dock. Then the Coldplay frontman opens his bible to Genesis for a riotously funny recounting of “Phil the Collins” being told by the “Angel Gabriel” that he’s just become the UK proggers’ frontman. Martin thus earns his duet with Gabriel the Goatee at the piano for “Washing of the Water.”

Sequencing inductions immediately into a performance by that same honoree feels as if the musicians are still singing for their supper, but it works – as does the absence of a show emcee. Having Gabriel reunite with Senegalese pied piper Youssou N’Dour on “In Your Eyes” up front proves an obvious early highlight, much like the Academy Awards opening with presentation of the Best Supporting Actress prize. A Linda Ronstadt tribute next upstages it nonetheless.

Thirty-one albums, 100 million units moved, and the musician responsible “more than anyone else,” according to inductor Glenn Fry, for the birth of the Eagles all speaks for itself. Citing the 67-year-old singer’s absence from the ceremony as due to her retirement and the fact that “she doesn’t travel anymore” feels disingenuous given Ronstadt’s public acknowledgement of her diagnosis of Parkinson’s disease. I flashed back HARD on the spunky Seventies cowgirl during the ensuing musical segment.

Carrie Underwood taking on Ronstadt’s 1967 breakout, Michael Nesmith indelible “Different Drum,” made me bitter the Monkees will likely never reach the Hall of Fame. Eclipsing no less than Bill Murray and Steven Spielberg, Underwood gets more reaction time than any other single person throughout the telecast. Bonnie Raitt and Emmylou Harris covering another Texan via a Ronstadt hit, Roy Orbison’s “Blue Bayou,” hits the sweet spot next. Sheryl Crow continues to embody her selection (“You’re No Good”), but Stevie Nicks nails her closer (“It’s So Easy”). The latter’s self-deprecating crack about not looking as good as Ronstadt in cut-offs is patently untrue.

My mother had a Ronstadt collection I wore out in the Seventies. How quickly we forget such DNA tattoos in our ever-consuming shark quest for new musical discoveries.

Glam rock’s Fab Four – Kiss – follows, unable to perform due to internal strife and Hall politics. That hardly matters in light of Rage Against the Machine guitarist and new Bruce Springsteen foil Tom Morello’s rousing speech. The Harvard grad proves he could no doubt share the stump with Barack Obama, so convincing crescendos his rally cry. Four pair of black sunglasses, four bad, black-hair dye jobs, and 40 pounds of jowls from the band itself can’t match up, although Gene Simmons, Peter Criss, Ace Frehley, and a surprisingly outspoken Paul Stanley on the “handful of critics” controlling the Hall’s voting process don’t embarrass themselves otherwise.

There’s no bigger E Street Band booster than this married-a-Jersey-girl Springsteen fanatic, but the Wrecking Ball crew’s enshrinement feels... like an excuse to get their Boss in on the proceedings. Next comes Bob Seger’s Silver Bullet Band, right? Bruce himself makes a case for Neil Young and Crazy Horse, Simon and Garfunkel (okay, that one’s mine), etc., and let’s note forget Smokey Robinson’s truly divine Miracles. David Sancious, precursor to Professor Roy Bittan, gets more face time than Youssou N’Dour and Questlove, and makes the most of it on long, joyous airings of early Springsteen faves “E Street Shuffle” and “Kitty’s Back.”

And ultimate prize-winners Nirvana? Forgiving every Foo Fighters disc after the first two, Dave Grohl can truly do no wrong; Courtney Love keeps it shockingly short and sweet; and St. Vincent leading the trio of Grohl, Krist Novoselic, and Pat Smear through “Lithium” goes mano to mano with Kim Gordon absolutely atomizing “Aneurysm.” Joan Jett, who Novoselic points out is not in the Hall of Fame, on “Smells Like Teen Spirit” should’ve worked, and Lorde sounds like she’s had her jaw wired shut on “All Apologies.” Good idea, frankly.