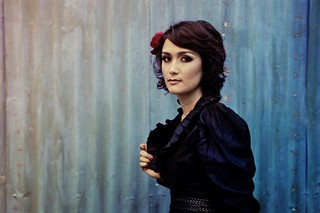 Hunt first became involved with Austin Live Showcase, a venue inside the Austin Alehouse (301 W. Sixth), during South by Southwest.

“I was working with the group Win Within and a program I started, Fuel Our Fire: Heal the World Through Music,” explains Hunt. “I booked the Alehouse with 90 different acts from 11am to 2am every day and I hosted it. I also ended up sitting in with about 30 of them – rock & roll bands through an act with flamenco guitar.

“The people at the Alehouse liked what I did so much, they invited me to become their music coordinator.”

Hunt recalls a radio program she took part in last summer in Tomball at music/food/club non-profit Main Street Crossing, where a local disc jockey interviewed and performed with his onstage guests. She’s adapted that format to her own style.

“I’ve been touring with so many different bands and so many different collaborations that I realized it’s fun for people to play outside of what their normal thing is,” says Hunt. ”I’ve invited musicians I know but don’t get to play with to do a different show where I interview them and play with them. We hope it’ll be a show that’s never happened before and will never happen again.”

Upcoming guests include Emily Gimble, Reed Turner, Sarah Sharp, Graham Wilkinson, and more, plus what she’s referring to as surprise guests – names generally too big to play in the intimate setting of Austin Showcase Live. The venue’s been hosting music for a few months now, but it’s having an official launch party with music from Ali Holder on Thursday and kicks off its official music calendar with the Whiskey Sisters Friday.

Making all her performance unique might seem enough, but Hunt has something loftier in mind.

“It’s all in support for Fuel Our Fire. I do five-day workshops for kids all over the world. That’s the point of all this: to create a self-sustaining model that supports Fuel Our Fire: Heal the World Through Music. It’s really inspiring to be a part of it.”