The Life & Friends of Tarka Cordell After spending the day with his family in the English countryside, Cordell returned to his London flat and took his life. That was 2008 and he was readying a solo career with Wide Awake in a Dream. The album will finally be released later this year.

One of catchiest tracks on Life: Tarka & Friends is “Girls, Keith,” covered by Scoundrels & Dirty Gentlemen. “What’s wrong with girls, Keith? They make me happy.” The guitar riffs are heavy with Keith Richards influence, one of its author’s mentors. Cordell partied even too hard for the Rolling Stone. And it was J.J. Cale who taught Tarka to play guitar when he was a boy.

His father Denny Cordell produced Procol Harum’s “Whiter Shade of Pale” as well as albums for the Moody Blues, Joe Cocker, and Tom Petty & the Heartbreakers’ debut. He initially ran Island Records subsidiary Aladdin, then formed his own label, Shelter, with Leon Russell.

For me, this story begins with cable television’s FX channel shoot-out, Justified, whose recent season five closer ended on Ruby Friedman’s version of “You’ll Never Leave Harlan Alive.” I immediately Sound Hounded whose magnificent voice was singing. That lead me to the glorious celebration of the music and life of Tarka Cordell.

“Life started with Ruby recording ‘Life,’” explains the latter. “She’s an incredible artist and her vocal performance still gives me goose bumps. My studio in Los Angeles is filled with Tarka’s beautiful instruments and mics. Every record and artist that I produce has Tarka’s energy and sounds in the music.

“Tarka was my best mate,” continues the producer. “We met in New York and just clicked. We met for a pint, it ended up being at least 10, and it was on. He’s the one who gave me the confidence necessary to make the jump from just drumming to becoming a producer.

“Tarka was a gentle soul, generous and caring, a true friend, and loads of fun. There isn’t a single day where I don’t think of him.”

The first single off Life: Tarka & Friends, “Lovely New York,” is sung by Lemonheads leader Dando, another mentor to Tarka.

“In lovely New York, there’s a spring in my step again/ The springs in my bed are gone, the kid’s kissing the hydrant that’s on/ And I’m still high/ It’s the constant kicks that keep me stoned/ It’s not that I don’t love her, I just can’t go home.”

Another standout is ballad “The Sun,” by Colonel Coyote, featuring Elena: “It’s clear it’s me, and I ain’t gonna let you down/ Got a corner in the sun, California here we come.” The simplicity of vocals, piano, and drums is gorgeous and heartbreaking. You can imagine driving the California coast with your insides crumbling.

When I asked Barney, who lives with his family in London, what Tarka was like, he exclaimed, “Fun!” Elena adds, “Way too much fun.” The brothers were very close growing up. Sundays in London would find Tarka relaxing, “cooking up a big lunch after a rocking Saturday night.” His inspirations?

“Tarka made a movie called The Promised Land, which was selected for SXSW after he passed away,” says Barney. “He loved all things Southern. It was started by our family’s love of the 1973 zydeco album Another Saturday Night and Bobby Charles!”

Me, I hail Life as the album of 2014. And I love the cause as well: proceeds benefit CALM, an English charity dedicated to preventing male suicide, the primary cause of under-50 male deaths in the UK. Life is currently available in the U.S. via iTunes, with vinyl and CD available directly from Room 609. 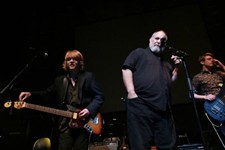