Thursdays in the Gallery she marries punk/country/schmaltz 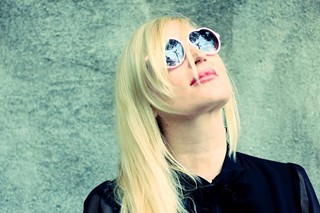 Mueller, who wears vintage white boots under vintage long gowns – her long blond hair falling against the mic as she jams on her guitar – says her punk background and love songs “bring it all forward, while not forgetting or isolating anything that resonates in me.”

Austin Chronicle: How did your residency at the Continental Club come about?

Liv Mueller: I was in an Austin band in the Nineties called the Lovelies and we used to play at the Continental frequently. When I came back into town, I contacted [owner] Steve Wertheimer and sent him some links to what I was doing currently. Out of the blue, he asked me to start this residency on Thursdays because he had a spot opening up. I honestly can’t say how grateful I am for that, because there are a lot of really, really good musicians in Austin. I feel really lucky.

AC: Tell me about your childhood.

LM: Believe it or not, I came up in the punk scene in the midwest. Some of the first shows I attended were X and Black Flag. Punk music consumed me for all of my teens and early 20s. Then I moved to Nashville.

AC: Your influences changed there?

LM: In Nashville, I learned to play country music. That was an interesting time, because what I was seeking was this old Nashville that didn’t exist anymore. I had been listening to Loretta Lynn and Tammy Wynette records. I thought all I needed to do was drive down to Nashville and straight into stardom and fame, with fortune awaiting me at the Grand Ole Opry.

LM: Yes, but it just wasn’t like that at all. Things are never the same in your mind as in reality. I went there and had a good time. I played on the streets and in different clubs there. Ultimately, I was too incredibly young and scared. I was not ready to be that far away yet, so I went back home. I returned back to Wisconsin for a few years and then moved to Austin, living here in the Nineties.

AC: When did you start playing out live?

LM: When I was 17 years old, but I didn’t have my own band. I would sing with other local punk bands in the Wisconsin scene. I joined my first band when I was 19 years old, called the Screaming Lilies.

AC: What made you decide to become a solo act?

LM: I’ve seen a couple one-man bands and I really liked that idea of being completely self sufficient. Load in’s a breeze, you get to keep all the money, and you’re accountable only to yourself. If you have a great gig, you only have yourself to hug. If you have a horrible gig, you only have yourself to talk to at the end of the night. And I just love this idea of having a challenge. I was scared to at first, that’s why I decided to try it. My experience has been that walking through our fears is the only way to can conquer them.

AC: Do you miss having other players in a band?

LM: I spent a little over 20 years being in bands and the dynamic in bands can be amazing. Yet there’s another side of that point. It can be like being engaged or married to three or four people. It can be a lot of work creatively, emotionally, intellectually, and at this point it’s work I don’t feel like doing. I’m happy as a clam. I wouldn’t rule out helping out other projects or bringing people into what I’m doing, but these days it’s hard to envision myself joining a band.

[At this point, she winks at me and says, “But I would join the Painted Redstarts,” my band. I think to myself, “Now that’d be cool.” So we decide to at least write a song together even though we’ve just met.]

AC: You recorded your latest album, Love Songs for the Forlorn and Misguided, yourself right?

LM: For nine out of 11 songs I did not use computers at all. I used a Boss BR900, which has a CD burner and some effects in it. Everything was done by either plugging directly into it or by micing amps. The neat thing about that is you can’t auto tune. You have to make sure you get a good take from beginning to end.

I’ve recorded tons of albums in studios. That’s great too, you know, easy breezy. This took a lot of work. The other two songs were recorded in a different studio.

AC: If not music, what else might you be happy doing?