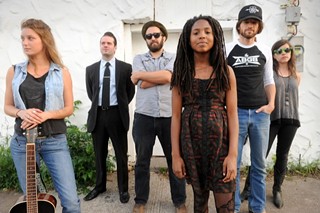 The fight to fly Dana Falconberry, Aisha Burns, Jesse Moore, Mrs. Glass, Carson McHone, and Leo Rondeau – the six-pack chosen by fellow musicians and bookers to represent Austin at next month’s North by Northeast Music Festival in Toronto – begins tonight with a fundraiser at the White Horse.

Local songwriter and Austin Independent Radio creator Chris Brecht got the idea to connect the local scene with the Canadian city that hosts SXSW’s sister conference in March, when he sat down with a woman from Music Canada to talk about our melodious ecosystem.

“She mentioned North by Northeast, and I started putting two and two together – the way Toronto’s into our music scene,” explains Brecht.

Brecht’s lunch date revealed that only two local artists were coming to NXNE, scheduled for June 13-22: Spoon and Alejandro Escovedo – though four others, Zorch, Madisons, and LNS Crew members Kydd Jones and Cory Kendrix, have since been added. Brecht suggested he should organize an ATX contingent, but the two laughed it off under the guise of “no time.”

And yet, in “no time” at all, he was in the office of City Music Program Manager Don Pitts, conceiving ways to pull together the $1,800 necessary to fly and subsequently house six musicians traveling from Austin to Toronto. Ultimately, he opted for an online fundraiser and subsequent benefit concert series, giving participating venues a say in who should hit Toronto.

Brecht says plane tickets run about $450, and three rooms at a hotel for three nights should creep up to around $1,500. That’s a lot of loot for an all-ATX showcase. He thinks it’s worthwhile and hopes fans’ interest in each artist’s development helps foot the cost.