Some heads are gonna roll 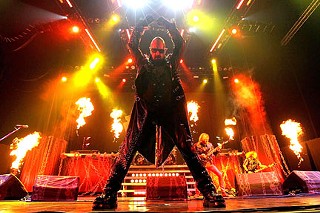 I am the god of hellfire: Rob Halford leading Judas Priest in San Antonio, 2011. (by Gary Miller)

This lot notches 83 acts, including one excessively long name (The World is a Beautiful Place & I Am No Longer Afraid to Die), four preferring all caps (SOHN, SZA, ASTR, METZ), and two reunions: Los Angeles alternative rockers Failure and local emo foursome Mineral, playing its eighth show in 17 years.

Also worth noting is the Orange Stage facilitating ATX’s love affair with Saharan desert acts (Tinariwen), the next chapter in the city’s most tumultuous band-to-fan relationship this side of FFFFavorite Danzig (Foxygen), and five locals: This Will Destroy You, Sour Notes, Good Fields, Scott H. Biram, and Dana Falconberry.

Elsewhere, hip-hop gets served via Wiz Khalifa, 2 Chainz, local favorites Atmosphere and Nas, and Run the Jewels, the collaboration between producer El-P and rapper Killer Mike that shook Mohawk last August. Transmission booker Graham Williams said the conversation between Transmission and RTJ got started almost immediately after Killer Mike walked away from a failed Half Pipe performance experiment last year.

“We owed him a makeup show, and I’m stoked it’ll be RTJ,” enthused Williams Monday afternoon.

Filling out the Blue Stage, Transmission’s tapped FFFF vets Flying Lotus and Z-Trip, SXSW highlight Gary Numan, and the recently dormant Girl Talk, back after a four-year recording hiatus. The Digital Wild and Zorch, the avant-electro duo responsible for running East Austin’s Museum of Human Achievement, represent the only Blue locals on the list. Find Austin Francophiles Crooked Bangs on the Black Stage instead. Speaking of which....

Of course that’s all window dressing for festival headliner Judas Priest, which descends on Austin for the first time since 1988, when the British Steel magnates slayed the Erwin Center for the third time in a five-year stretch that saw demolition of catalog jewels including 1982’s Screaming for Vengeance and 1984’s Defenders of the Faith. The Birmingham quintet’s down to three original members (singer Rob Halford, guitarist Glenn Tipton, and bassist Ian Hill), not that anyone’s keeping track given that old school headbangers will be counting their blessings Transmission’s booked a metal act that laid the groundwork for its most famous headliner, Slayer.

Topping off the hefty grab bag: Red House Painters core Mark Kozelek in Sun Kil Moon, which slayed in March at SXSW; DJs Ryan Hemsworth and the Internet, comprised of Odd Future’s Matt Martians and Syd the Kyd; 2013’s it-girl Sky Ferreira; and sexual genius Elgin “Ginuwine” Lumpkin, whose 1996 showstopper “Pony” remains the most provocative song this side of a D’Angelo jawn.

All that remains for now is which stage moves across the street to Butler Park and who’s going to fill out the comedy-centric Yellow Stage, announced July 1. Williams added that last year’s capacity issues presented by the Yellow Stage’s too-small tent shouldn’t force the same issues this year, saying Transmission plans to book comedy “within our means this time.”

“Tenacious D wanted to do an underplay with a small space [last year],” explains Williams. “This year, I think we’ll have the right size acts in the right spaces to avoid that and keep the tent option, but I can’t be sure until we finish booking comedy and working out the production around the lineup.”

Tickets for the festival go on sale Tuesday, May 20, at 10am. Might just want to start hitting the “refresh” button on your browsers now.