“It’s about an old man that stalks pretty girls in spandex. He’s going around watching them at the water park,” explains the song’s author, Aaron Sinclair. “I’m fine with it being creepy if it elicits a reaction from the person listening to it.”

Sinclair, a Boston-to-Austin transplant who’s become a respected songwriter around town, has forgone his long held Frank Smith moniker for this release, issued under the abbreviated A. Sinclair. The band that supported last year’s Frank Smith LP Nineties remains the same.

“I’ve been running around under that Frank Smith name for 13 years,” shrugs Sinclair. “For a long time, it was all acoustic guitars and pedal steels and stuff, but the last two records gradually stepped away from that. This EP, being a full-on rock record, seemed like a good time to break away and retire the Frank Smith name.”

A. Sinclair hit KUTX’s Studio 1A earlier this afternoon for a live performance celebrating a dual EP release with Otis the Destroyer on Mohawk’s inside stage Thursday night. 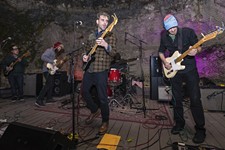 A. Sinclair Rises Into the Eye of the Tiger
ATX indie trueheart sings “time to find out what really matters”