In its previous six incarnations, APF had never had a day like Saturday. Not only did virtually every single slot between 1:15pm openers Mirror Travel and tertiary closer Acid Mothers Temple putting out fires just before midnight matter, they all proved revelatory. Ghost axe in the machine Mark McGuire, Brazilian psych Beatles Boogarins, Unknown Mortal Orchestra’s sword Phish – knock-outs all. 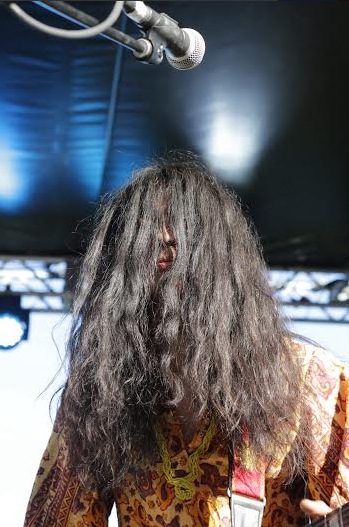 One fifth of Kikagaku Moyo (Photo by Jana Birchum)

Industrial-strength dust headlined Carson Creek Ranch once again yesterday, but in the bucolic Elevation Amphitheatre on the Colorado, fully seated for a suppertime set by youngsters Kikagaku Moyo, APF vibed seriously Monterey Pop/Woodstock. Japan-stamped folk rising to electrical storm, the four longhairs and sitar channeler of Kikagaku Moyo demonstrated power, warp, drone, and drang on their first visit to the States. APF has graciously opened a portal to international acts and Japanese bands in particular. Psych music and Austin go together like the 13th Floor Elevators.

“Thank you for coming to see us, even if it’s so hot,” they noted.

Ninety degrees at 6:30pm felt like spring as their pastoral groove would turn on a thump of blunt force bass and then head for the ozone on a Tommy Hall jug riff. Butterflies in the Amphitheatre went bezerk and sweet leaf cut the haze. Trad builds, march-time fills laced with cutting leads, rumbling breakdowns: Looks like the beginning of a beautiful brotherhood between ATX and Kikagaku Moyo. 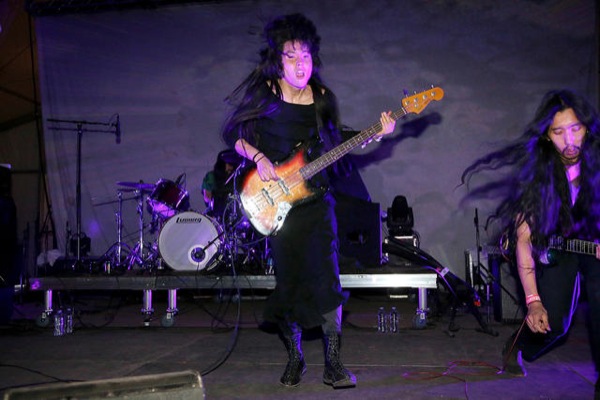 After UK freight train Toy smoked like no less than Spiritualized and Swervedriver at long gone Austin bunker Liberty Lunch, and TV on the Radio spin-off Higgins Waterproof Black Magic Band summoned both the Clash and PiL, Earthless became Cream at the “Crossroads,” soloing a stunned, agog tent into zero gravity on a beat-up Stratocaster, earthquaking kit, and Rickenbacker bass. Bo Ningen followed that with a messianic recall of T. Rex, Redd Kross, and Rush.

The London-met Japanese quartet began through so much reverb that their two guitars made synth sounds to accompany an insistent dance backbone. Slowly though the hot mess emerged a Geddy Lee bounce and faint Temples of Syrinx hologram. Androgyny fit the frontman as tight as his feminine shrieks and the group’s Deep Purple pulse began to overtake the proceedings in “Highway Star” mode. They then hit warp speed.

Mosh, we did – twice – only time in the weekend, no doubt. The 20-minute closer droned space rock until the dust and lack of oxygen in the Tent forced virtual whippets on everyone. Singer Taigen Kawabe rode the bow of the audience crush like Jagger and soon stampedes of kids pushed through the crowd to get closer to the primal heartbeat of supersonic ascension. Colossus rock.

Transcendence had been reached. Rock & roll oneness. The Whole. 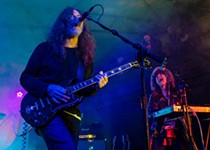 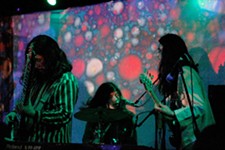