A pair of Japanese guitar storms

The Earth Is Not a Cold Dead Place. Yet. Saturday night, amidst the choking dust storm that was Carson Creek Ranch, two Tokyo-born combines generated enough fire and ice to both cool the 90-degree heat of the day and whip up the winds blowing at midnight. Mono soothed until it roared, and Acid Mothers Temple literally combusted.

At turns deeply emotive and apocalyptic, the former fourpiece remains the Japanese equivalent to Austin’s Explosions in the Sky. Lit only by white floor lights inside a darkened Levitation Tent, visuals opening a lysergic portal to the heavens at the midpoint of the makeshift venue’s roof, Mono practiced instrumental rock’s now timeworn diminuendo and crescendo as if they had helped patent it. 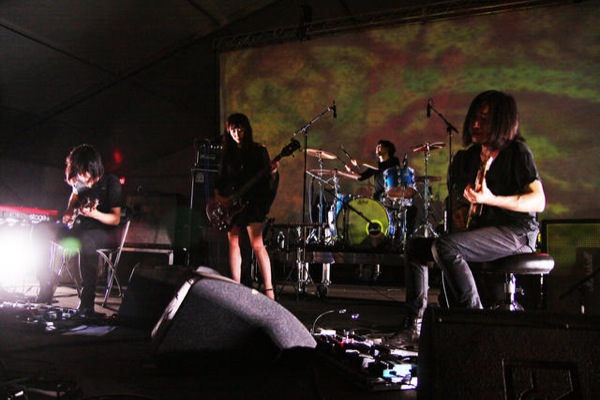 With both guitarists seated and the drummer on his stool, ofttimes the whole band was barely visible once the bassist sat at the piano. Those keyboards, in fact, differentiate Mono from most of its peers. Where Explosions in the Sky strings gravity and melancholy with unparalleled depth, their Rising Sun counterparts go deeper into a wordless sorrow befitting its ancient culture.

The Tent’s antithesis, meanwhile – the Elevation Amphitheatre down on the waterline – wrought a similar detonation. Shrouded in a toxic haze of dirt made exponentially worse by smokers (time to gather them into their very own tent so they can suffocate each other once and for all), the witch doctors of Acid Mothers Temple lit up their cyclone rock bathed in purple light and a flail of hair and smoke. Poor amplification, muddy sound, and hardcore vox mattered little as projections on the opposite shore danced like animation. 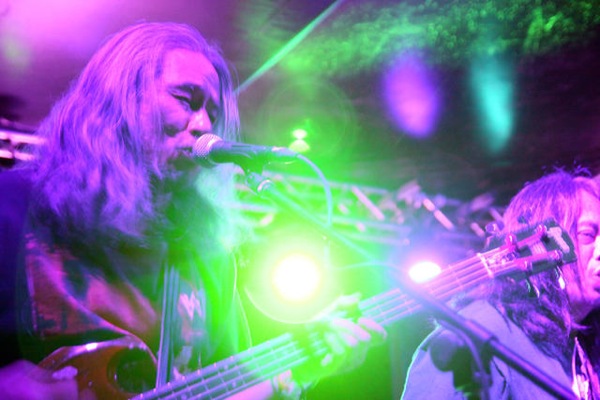 Free-form noise settled into delicate axe grinding midway through the hourlong set, the tree nearest the stage lit by green, Christmas tree-like highlights. On the headlining stage, the Horrors reenacted the second coming of Gene Loves Jezebel while thinking they were really Primal Scream and the Cure all in one. This hampered the AMT spell somewhat.

So the Japanese contingent went Hendrix at Monterrey. The final number climaxed in one guitarist setting his instrument on fire then coating parts of the drum kit in kerosene and lighting that as well. The only act that could follow that was beating a hasty exodus out of Carson Creek Ranch.