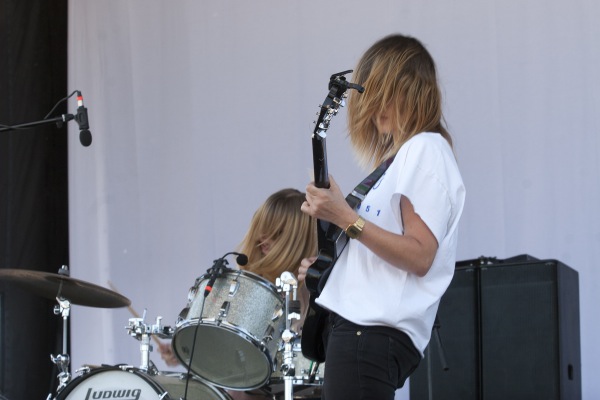 Before most even notice bassist Paul Brinkley, singer/guitarist/frontwoman Lauren Green and drummer Tiffany Lanmon come into focus. The ladies, friends since high school, formed Follow that Bird in 2006 with Brinkley and made a name for themselves around town and beyond. Last year, the trio changed its name to Mirror Travel after a label mishap and then put out its debut full-length.

Onstage, it’s something worth marveling over how the threesome’s deviating stage personas meet square in the middle. Whereas Green arrives straight-faced (stone cut) and unwavering in her concentration towards each song, Lanmon hits the kit the way two children work a sea-saw, bouncing up and down and swaying from side to side with a broadening smile that borders on a giggle. Brinkley all but disappears save for the fact that he anchors the band on his four strings.

As one, they built set opener “I Want You to Know” from nothing, crashed it down, and then rushed into another watery slide. While Mexico sounds sun-swept and wind-burnt on disc, live it teams like the desert at night. Green’s guitar strings ping, ring, and flare on “Young Gold,” while Lanmon’s drum fills crash into “Stoner.” Lyrics are indiscernible, hooks a series of gasps and bellows.

Lanmon finishes a song, coiles forward, and waves stageside to a friend. Brinkley embodies the Seventies in garb and nonchalance. Green darts towards a microphone and introduces their penultimate song as “Parties.”

Wouldn’t you know it – they’d already crashed the biggest one of the month. 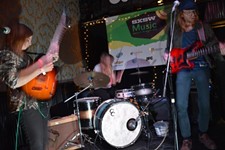