Mark McGuire was blessed with an infamous name. Disgraced Major League baseball slugger or a slight Ohioan making sparkling, purified New Age music? They’re only a few letters and solar systems apart. As for the latter, you always trust a man whose optimism is such that his Twitter account lists his location as “Earth, B.A. (Before Aquarius).” 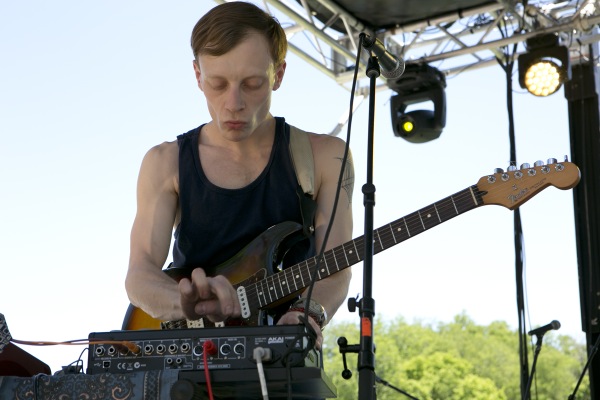 The ascension begins at the Elevation Amphitheatre’s bucolic setting on the river. Armed with a tank top, a Fender, and a whole universe of guitar pedals and loops, McGuire streaks acid-washed riffs over purple twinkles and glistens. Occasionally, he inserts spoken word samples of a philosopher/cult leader/Aleister Crowley weighing in on trademark Big Questions.

These are played without the slightest whiff of irony. McGuire would be more than happy having a half-hour conversation with you about energy. He used to tour and play in Emeralds, a gorgeous drone band from Ohio that made music like computers falling in love. In the wake of their breakup he’s stayed active, but there’s something a little lonely about seeing a gaunt man all alone on a big stage.

Maybe that’s why his closer was so touching. He introduced it as a tribute to his audience, and humanity in general, about how we all have something special inside us, then jumped headfirst into a careening, triumphant guitar ballad. It gets isolating on the road, but McGuire focuses on the good things. It’s his musical universe, and we’re just listening to it.

You could say his set was a real home run. Anyone? Anyone?