Having executed their first American performances right here in Austin just six weeks ago during South by Southwest and remaining on tour ever since, Brazilian guitar outfit Boogarins are still counting their blessings. “We’re very happy to be here,” grinned guitarist Benke Ferraz. “This is a dream for us!” The young quartet, dressed in jeans and polyester shirts that look like they’ve been neatly hung up in a closet since 1974, got an early rise with “Luciferandis,” which rides a tumbling guitar riff and showcases frontman Fernando Almeida’s lovely, lispy, Portuguese croon.

“Where are you from?” demanded the audience.

Throughout the 40-minute set, Boogarins hardly touched material from their recent, home-recorded debut, As Plantas Que Curam. When they did, like on the melodically sophisticated “Doce,” they took it for a ride, adding lengthy, tempo-defying breakdowns, loud/soft dynamics, and extended soloing from Ferraz, the hotshot guitarist who’ll run the fretboard on his Stratocaster then drop to his knees and crank the dials on his tremolo pedal until your brain quivers.

Though the disc only came out last fall, Boogarins are clearly already well past it and focused on something else. Young bands grow up so fast. These four unassuming Brazilian rockers brought idyllic music for a sunny Saturday on Carson Creek Ranch’s natural waterfront amphitheater.

Dense foliage along the opposite banks of the Colorado River wasn’t green enough to match the youthful vitality exuded onstage. 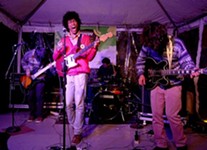