African guitarist whips up a sandstorm

Nomad is also a noun representing an individual who can’t seem to stay in one place. It’s a fitting LP title for Bombino, the Tuareg guitarist who swept out of the Sahara Desert three years ago and somehow wound up this weekend inside a dust bowl in Southeast Austin.

Psych music manifests in a number of minute ways, but Bombino (né Omara Moctar) only inhabits the genre insomuch as he adores reverb on a Stratoscaster. The 34-year-old proved the only artist outside of ATX’s Octopus Project – another APF outlier – to get bodies truly moving Saturday, with progressive beats and busy hammer-on-filled guitars whipping the swollen crowd into a sandstorm. 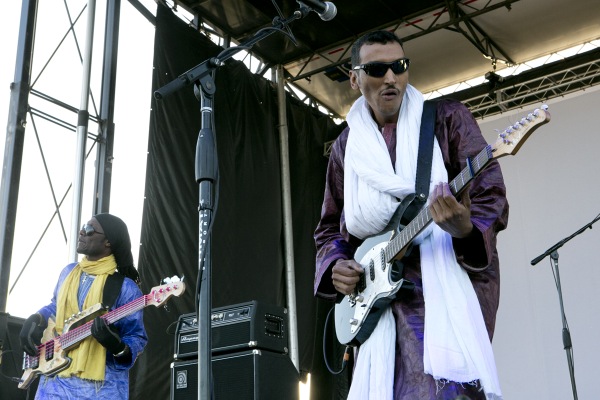 Singing in Tuareg, the native language of Mali (bordering the guitarist's native Niger on the west), the messages imparted throughout the new material by Bombino and his backing trio adhered closer to Jimi Hendrix and Mark Knopfler than fellow Saharans Terakaft, or Tinariwen at APF in 2013. Dressed wholly in dashikis, the fourpiece employed jams in lieu of strict song structures, letting Bombino stretch out and showcase his unique playing style. His smile everlasting throughout the 45-minute set, the bandleader responded with full fervor, riverdance stepping as he led his band through subtle changes.

“This is our final stop on a five-week tour,” the rhythm guitarist announced midway through the set. “We couldn’t go out in a better way.”

Shortly after, the band laid into an extended jam that began and ended with little in the way of true direction. Both Bombino and his rhythm guitarist were soiling now, phasing out all structure and concentrating on the ways their noodlings would balance against the rhythm section. Bombino tilted his head back and grinned broadly.

Austin’s a long way from Niger, but a short step from what feels like home. 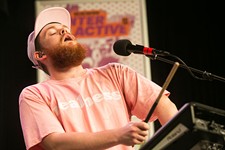