Psych Fest radio with a touch of Austin Derbyfest and more!

With Austin Psych Fest staging a major trip on Carson Creek Ranch this weekend, Kevin Curtin and I slapped a super-sized order of reverb on our vocals and circled into Chronolog’s stratosphere. 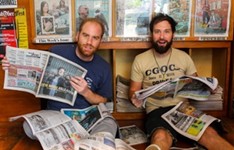