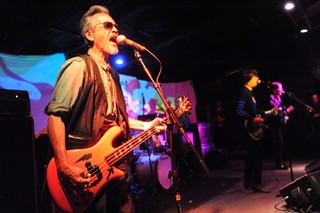 In the group’s current resurgence after a two-decade layoff, these venerable cult icons have finally caught up with their underground-legend status, attracting an eager audience that’s turned what was initially intended as a short-term reunion into a surprise comeback.

The Groovies’ time-tested grit was in full effect on catalog favorites “Yeah My Baby” and “You Tore Me Down,” as well as covers of Freddy Cannon’s “Tallahassee Lassie” and the Byrds’ “I’ll Feel A Whole Lot Better.” Chuck Berry’s “Don’t You Lie to Me” and the Alexander-sung “Married Woman,” meanwhile, emphasized the raunchy blues edge that balances the foursome’s Beatles fetish. Though never recorded, another number drawn from the band’s vintage repertoire was a surging take on NRBQ’s “I Want You Bad.”

By the time the set climaxed with a rousing one-two punch of bigger-than-life Groovies anthems “Slow Death” and “Shake Some Action,” spirits at the packed outdoor stage at Red 7 were so high that even the portly knucklehead who briefly bum-rushed Wilson’s microphone couldn’t harsh the vibe.