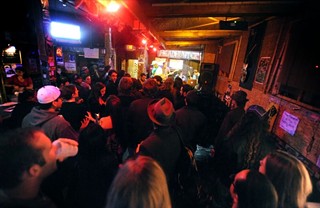 The front door of Headhunters was locked Wednesday night during the Red River music venue’s normal business hours. I entered through the back where the staff and owner Steve Ricci were busy removing production gear from the bar’s patio stage.

A hostile Ricci declined comment, citing legal reasons and a personal hatred for the Chronicle (“sucking cock backwards and only caring about themselves"), then asked me to leave. Appealing on the grounds that I’m a musician who’s performed at his venue on more than a couple occasions, he acknowledged that the club was now closed and that he has nine locations he’s considering for a future venue site.

He wouldn’t say why, but since February, word in that neighborhood has been that Ricci was fighting to keep his lease after the property at 720 Red River was purchased. The vaguely tiki-themed establishment opened in 2003 as a go-to spot for a working class segment of Austin’s music community thanks to its veteran bar staff, which over time would include members of the Oklahomos and Brewtality, Inc. While it had a reputation for booking bands that other venues in the area wouldn’t touch, Headhunters served as a spot for new local acts to cut their teeth and a tour stop for lesser-known road warriors.

South by Southwest used both the club’s interior and patio stage annually. In November 2012, Headhunters was selected by Spike TV's reality show Bar Rescue to be remodeled under the guidance of consultant Jon Taffer. The conflict between Taffer and the defiant Ricci made for one of the program’s most talked about episodes. After the secretive 36-hour renovation, the longstanding venue reemerged as steampunk hangout Metal & Lace, though everyone continued to refer to it as Headhunters.